Southern (NYSE:SO – Get Rating) had its target price lowered by Morgan Stanley from $67.00 to $66.00 in a research report issued on Monday, Stock Target Advisor reports. The firm presently has an “underweight” rating on the utilities provider’s stock. Morgan Stanley’s target price would suggest a potential downside of 11.25% from the company’s previous close.

Several other research firms have also recently issued reports on SO. Wells Fargo & Company raised their price target on Southern from $68.00 to $80.00 and gave the company an “equal weight” rating in a report on Tuesday, April 19th. StockNews.com started coverage on shares of Southern in a research note on Thursday, March 31st. They set a “hold” rating for the company. Mizuho lifted their target price on shares of Southern from $67.00 to $76.00 and gave the stock a “neutral” rating in a report on Thursday, April 21st. Bank of America lowered Southern from a “buy” rating to a “neutral” rating and reduced their price target for the stock from $75.00 to $71.00 in a research report on Monday, February 7th. Finally, Credit Suisse Group initiated coverage on Southern in a research note on Monday, April 25th. They issued an “underperform” rating and a $77.00 target price on the stock. Two analysts have rated the stock with a sell rating, six have issued a hold rating and three have given a buy rating to the stock. According to MarketBeat, the company currently has an average rating of “Hold” and a consensus price target of $73.63.

Southern (NYSE:SO – Get Rating) last announced its earnings results on Thursday, April 28th. The utilities provider reported $0.97 earnings per share for the quarter, topping analysts’ consensus estimates of $0.91 by $0.06. Southern had a net margin of 10.09% and a return on equity of 11.35%. The company had revenue of $6.60 billion during the quarter, compared to the consensus estimate of $5.93 billion. During the same period in the previous year, the firm posted $0.98 earnings per share. The company’s revenue was up 11.7% on a year-over-year basis. On average, analysts forecast that Southern will post 3.56 earnings per share for the current fiscal year. 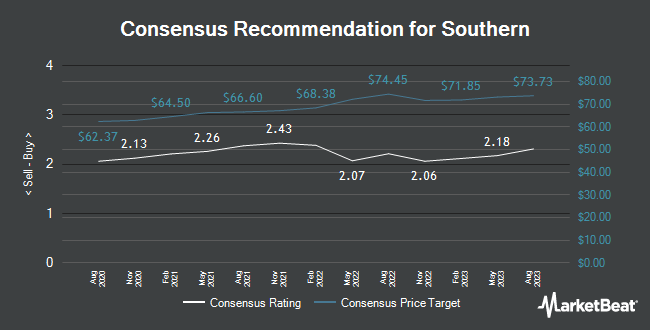