According to Zacks, analysts expect that Verrica Pharmaceuticals will report full-year earnings of ($2.04) per share for the current fiscal year, with EPS estimates ranging from ($2.28) to ($1.79). For the next financial year, analysts anticipate that the business will post earnings of ($1.52) per share, with EPS estimates ranging from ($2.26) to ($1.05). Zacks’ earnings per share averages are a mean average based on a survey of research firms that that provide coverage for Verrica Pharmaceuticals.

Verrica Pharmaceuticals (NASDAQ:VRCA – Get Rating) last announced its quarterly earnings results on Wednesday, March 2nd. The company reported ($0.35) earnings per share for the quarter, topping analysts’ consensus estimates of ($0.48) by $0.13.

Verrica Pharmaceuticals Inc, a dermatology therapeutics company, develops and commercializes treatments for people with skin diseases in the United States. The company's lead product candidate includes VP-102 for the treatment of molluscum contagiosum; that has completed Phase II clinical trial for the treatment of external genital warts; and which is in Phase II clinical trial for treating common warts. 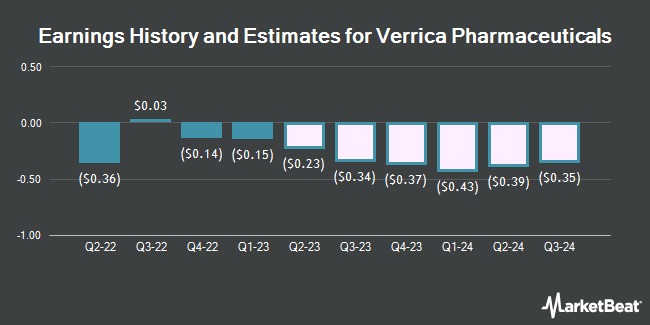 Complete the form below to receive the latest headlines and analysts' recommendations for Verrica Pharmaceuticals with our free daily email newsletter: