Analysts predict that East West Bancorp, Inc. (NASDAQ:EWBC – Get Rating) will report $519.53 million in sales for the current fiscal quarter, according to Zacks Investment Research. Four analysts have made estimates for East West Bancorp’s earnings, with estimates ranging from $516.00 million to $526.00 million. East West Bancorp reported sales of $444.90 million in the same quarter last year, which indicates a positive year over year growth rate of 16.8%. The business is expected to announce its next quarterly earnings results on Monday, January 1st.

According to Zacks, analysts expect that East West Bancorp will report full-year sales of $2.12 billion for the current fiscal year, with estimates ranging from $1.99 billion to $2.17 billion. For the next year, analysts forecast that the company will post sales of $2.47 billion, with estimates ranging from $2.27 billion to $2.64 billion. Zacks Investment Research’s sales calculations are an average based on a survey of research analysts that that provide coverage for East West Bancorp.

East West Bancorp (NASDAQ:EWBC – Get Rating) last issued its quarterly earnings results on Thursday, April 21st. The financial services provider reported $1.66 earnings per share (EPS) for the quarter, topping analysts’ consensus estimates of $1.53 by $0.13. East West Bancorp had a return on equity of 15.90% and a net margin of 46.15%. The firm had revenue of $495.00 million during the quarter, compared to analyst estimates of $478.35 million. During the same period last year, the company earned $1.44 EPS. East West Bancorp’s quarterly revenue was up 16.0% compared to the same quarter last year.

EWBC has been the subject of a number of research analyst reports. StockNews.com initiated coverage on East West Bancorp in a research note on Thursday, March 31st. They set a “hold” rating for the company. Wells Fargo & Company raised their price target on East West Bancorp from $95.00 to $100.00 and gave the stock an “overweight” rating in a research note on Friday, April 22nd. One analyst has rated the stock with a hold rating and seven have given a buy rating to the stock. According to MarketBeat.com, East West Bancorp currently has an average rating of “Buy” and an average price target of $95.00.

The company also recently disclosed a quarterly dividend, which was paid on Monday, May 16th. Shareholders of record on Monday, May 2nd were issued a dividend of $0.40 per share. The ex-dividend date of this dividend was Friday, April 29th. This represents a $1.60 annualized dividend and a yield of 2.26%. East West Bancorp’s payout ratio is currently 25.32%.

East West Bancorp, Inc operates as the bank holding company for East West Bank that provides a range of personal and commercial banking services to businesses and individuals. It operates through three segments: Consumer and Business Banking, Commercial Banking, and Other. The company accepts various deposit products, such as personal and business checking and savings accounts, money market, and time deposits. 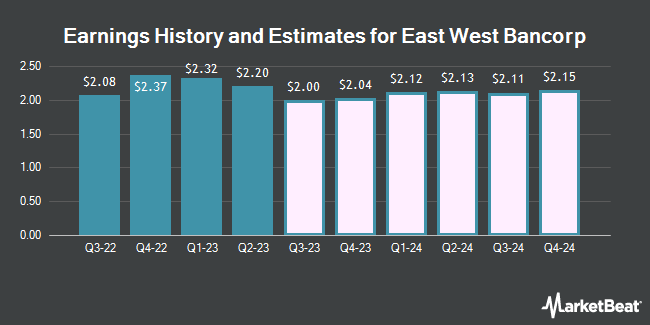 Complete the form below to receive the latest headlines and analysts' recommendations for East West Bancorp with our free daily email newsletter: