In other Seagen news, EVP Charles R. Romp sold 319 shares of the firm’s stock in a transaction that occurred on Wednesday, April 20th. The shares were sold at an average price of $144.32, for a total value of $46,038.08. Following the sale, the executive vice president now owns 49,816 shares in the company, valued at $7,189,445.12. The sale was disclosed in a document filed with the Securities & Exchange Commission, which is accessible through this link. Also, insider Vaughn B. Himes sold 12,000 shares of Seagen stock in a transaction on Thursday, March 3rd. The stock was sold at an average price of $127.05, for a total transaction of $1,524,600.00. The disclosure for this sale can be found here. Insiders have sold a total of 70,634 shares of company stock worth $9,663,279 in the last quarter. 27.30% of the stock is currently owned by company insiders.

Seagen (NASDAQ:SGEN – Get Rating) last released its quarterly earnings data on Thursday, April 28th. The biotechnology company reported ($0.74) EPS for the quarter, beating analysts’ consensus estimates of ($0.98) by $0.24. Seagen had a negative net margin of 41.32% and a negative return on equity of 21.86%. The business had revenue of $426.50 million during the quarter, compared to analysts’ expectations of $401.75 million. During the same quarter in the prior year, the company earned ($0.67) EPS. The firm’s quarterly revenue was up 28.5% on a year-over-year basis. On average, research analysts predict that Seagen will post -3.51 earnings per share for the current year. 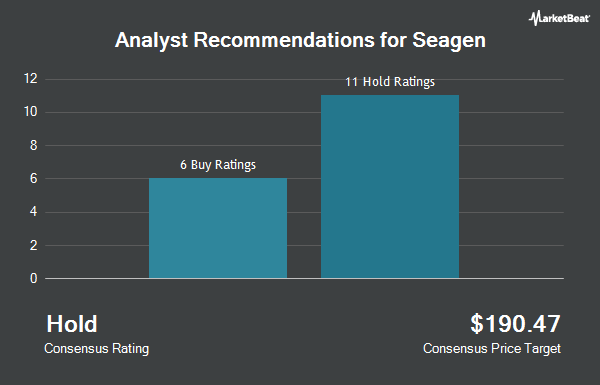