Armstrong World Industries, Inc. (NYSE:AWI – Get Rating) has earned an average recommendation of “Hold” from the thirteen research firms that are currently covering the company, Marketbeat.com reports. Two equities research analysts have rated the stock with a sell rating, two have given a hold rating and six have given a buy rating to the company. The average twelve-month target price among brokerages that have issued ratings on the stock in the last year is $116.11.

Armstrong World Industries (NYSE:AWI – Get Rating) last issued its earnings results on Tuesday, April 26th. The construction company reported $1.02 earnings per share (EPS) for the quarter, missing the consensus estimate of $1.13 by ($0.11). The company had revenue of $282.60 million during the quarter, compared to analysts’ expectations of $289.61 million. Armstrong World Industries had a net margin of 16.90% and a return on equity of 40.89%. The firm’s quarterly revenue was up 12.2% compared to the same quarter last year. During the same quarter in the previous year, the company earned $0.84 earnings per share. As a group, sell-side analysts predict that Armstrong World Industries will post 5.09 EPS for the current fiscal year.

The company also recently announced a quarterly dividend, which was paid on Thursday, May 19th. Investors of record on Thursday, May 5th were issued a dividend of $0.231 per share. This represents a $0.92 dividend on an annualized basis and a yield of 1.13%. The ex-dividend date of this dividend was Wednesday, May 4th. Armstrong World Industries’s dividend payout ratio (DPR) is 22.89%.

In other Armstrong World Industries news, SVP Mark A. Hershey sold 1,365 shares of the stock in a transaction dated Thursday, April 21st. The stock was sold at an average price of $95.11, for a total value of $129,825.15. Following the sale, the senior vice president now owns 45,053 shares of the company’s stock, valued at approximately $4,284,990.83. The transaction was disclosed in a filing with the Securities & Exchange Commission, which is available through the SEC website. Company insiders own 1.80% of the company’s stock.

Armstrong World Industries, Inc, together with its subsidiaries, designs, manufactures, and sells ceiling systems primarily for use in the construction and renovation of residential and commercial buildings in the United States, Canada, and Latin America. The company operates through Mineral Fiber and Architectural Specialties segments. 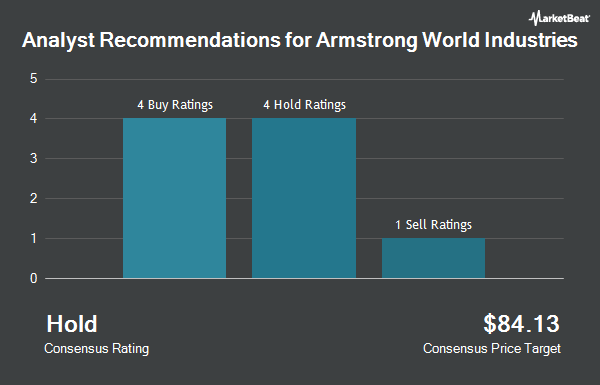 Basf Given a €52.00 Price Target by UBS Group Analysts

HelloFresh Given a €27.00 Price Target at Sanford C. Bernstein

ENI Given a €18.00 Price Target by The Goldman Sachs Group Analysts

Scout24 Given a €78.00 Price Target by Royal Bank of Canada Analysts

Infineon Technologies Given a €38.50 Price Target at JPMorgan Chase & Co.

Complete the form below to receive the latest headlines and analysts' recommendations for Armstrong World Industries with our free daily email newsletter: