Naspers (OTCMKTS:NPSNY – Get Rating) was downgraded by Barclays from an “overweight” rating to an “equal weight” rating in a report released on Tuesday, The Fly reports.

A number of other research firms have also weighed in on NPSNY. Investec lowered shares of Naspers from a “buy” rating to a “hold” rating in a research note on Friday, February 11th. JPMorgan Chase & Co. upgraded shares of Naspers from a “neutral” rating to an “overweight” rating in a research note on Tuesday, May 17th. Two analysts have rated the stock with a hold rating and three have given a buy rating to the company. According to MarketBeat, Naspers presently has an average rating of “Buy”.

About Naspers (Get Rating)

Naspers Limited operates in consumer internet industry worldwide. It operates through Ecommerce, Social and Internet Platforms, and Media segments. The company builds various companies that empower people and enrich communities. It holds investments in classifieds, food delivery, payments and fintech, education, health, and ecommerce, as well as ventures, and social and internet platforms. 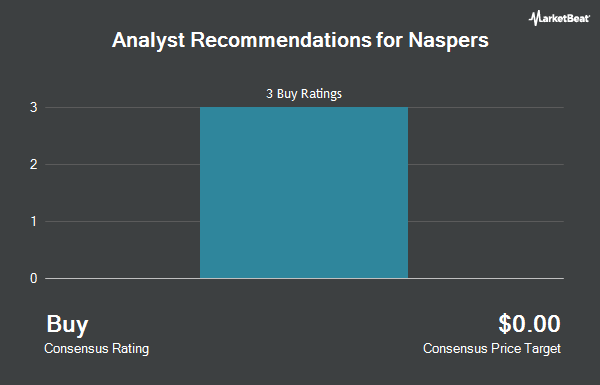 Receive News & Ratings for Naspers Daily - Enter your email address below to receive a concise daily summary of the latest news and analysts' ratings for Naspers and related companies with MarketBeat.com's FREE daily email newsletter.

Complete the form below to receive the latest headlines and analysts' recommendations for Naspers with our free daily email newsletter: