National Fuel Gas (NYSE:NFG – Get Rating) COO Ronald C. Kraemer sold 1,390 shares of the stock in a transaction dated Monday, May 23rd. The shares were sold at an average price of $70.00, for a total value of $97,300.00. Following the sale, the chief operating officer now owns 45,995 shares of the company’s stock, valued at $3,219,650. The sale was disclosed in a filing with the SEC, which is available through the SEC website.

National Fuel Gas (NYSE:NFG – Get Rating) last released its quarterly earnings results on Thursday, May 5th. The oil and gas producer reported $1.68 earnings per share (EPS) for the quarter, hitting analysts’ consensus estimates of $1.68. The firm had revenue of $701.72 million for the quarter, compared to the consensus estimate of $652.28 million. National Fuel Gas had a return on equity of 23.85% and a net margin of 23.67%. The company’s revenue for the quarter was up 27.3% on a year-over-year basis. During the same period last year, the business posted $1.34 EPS. On average, equities research analysts anticipate that National Fuel Gas will post 5.68 earnings per share for the current fiscal year.

The business also recently announced a quarterly dividend, which was paid on Friday, April 15th. Investors of record on Thursday, March 31st were given a dividend of $0.455 per share. The ex-dividend date was Wednesday, March 30th. This represents a $1.82 annualized dividend and a yield of 2.55%. National Fuel Gas’s dividend payout ratio (DPR) is presently 35.34%.

Several brokerages have recently issued reports on NFG. StockNews.com started coverage on National Fuel Gas in a research report on Thursday, March 31st. They issued a “hold” rating for the company. Raymond James lifted their target price on National Fuel Gas from $69.00 to $76.00 and gave the stock an “outperform” rating in a report on Monday, April 25th. 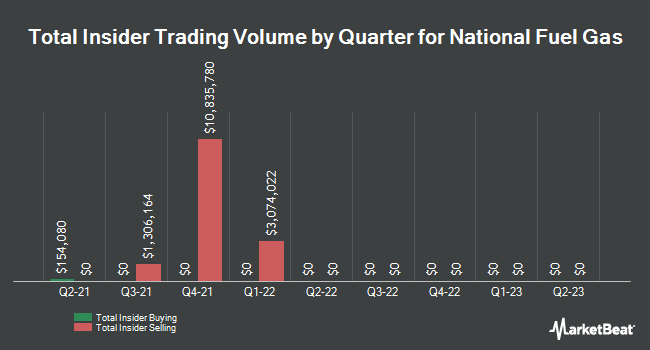 Sanofi Lowered to Hold at StockNews.com

Royal Bank of Canada Lifted to “Hold” at StockNews.com

Eli Lilly and Upgraded by StockNews.com to “Strong-Buy”