Equities research analysts expect QuinStreet, Inc. (NASDAQ:QNST – Get Rating) to report $141.19 million in sales for the current quarter, Zacks reports. Two analysts have issued estimates for QuinStreet’s earnings. The highest sales estimate is $142.49 million and the lowest is $139.89 million. QuinStreet reported sales of $151.20 million during the same quarter last year, which would suggest a negative year-over-year growth rate of 6.6%. The company is scheduled to announce its next quarterly earnings results on Monday, January 1st.

QuinStreet (NASDAQ:QNST – Get Rating) last posted its earnings results on Wednesday, May 4th. The technology company reported $0.04 earnings per share for the quarter, topping analysts’ consensus estimates of ($0.01) by $0.05. QuinStreet had a net margin of 0.59% and a return on equity of 1.16%. The company had revenue of $150.66 million for the quarter, compared to analyst estimates of $152.51 million.

In other news, Director James R. Simons bought 10,000 shares of the stock in a transaction on Thursday, May 12th. The shares were acquired at an average cost of $9.97 per share, for a total transaction of $99,700.00. Following the purchase, the director now directly owns 44,841 shares of the company’s stock, valued at approximately $447,064.77. The transaction was disclosed in a document filed with the SEC, which can be accessed through the SEC website. Corporate insiders own 6.80% of the company’s stock.

About QuinStreet (Get Rating)

QuinStreet, Inc, an online performance marketing company, provides customer acquisition services for its clients in the United States and internationally. The company offers online marketing services to its clients in the form of qualified clicks, leads, calls, applications, or customers through its websites or third-party publishers. 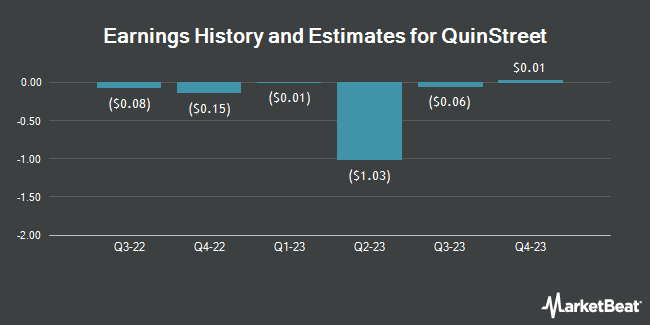 Complete the form below to receive the latest headlines and analysts' recommendations for QuinStreet with our free daily email newsletter: