Tactile Systems Technology, Inc. (NASDAQ:TCMD – Get Rating) Director William W. Burke sold 1,100 shares of the company’s stock in a transaction dated Thursday, May 19th. The shares were sold at an average price of $10.12, for a total transaction of $11,132.00. Following the sale, the director now owns 19,536 shares of the company’s stock, valued at $197,704.32. The transaction was disclosed in a filing with the Securities & Exchange Commission, which is available through the SEC website.

Tactile Systems Technology, Inc, a medical technology company, engages in the development and provision of medical devices for chronic diseases in the United States. The company offers Flexitouch Plus system, a pneumatic compression device for the treatment of lymphedema; Entre system, a portable pneumatic compression device that is used for the at-home treatment of venous disorders, such as lymphedema and chronic venous insufficiency, including venous leg ulcers; and AffloVest, a portable high frequency chest wall oscillation test for the treatment of retained pulmonary secretions such as bronchiectasis, cystic fibrosis, and various neuromuscular disorders. 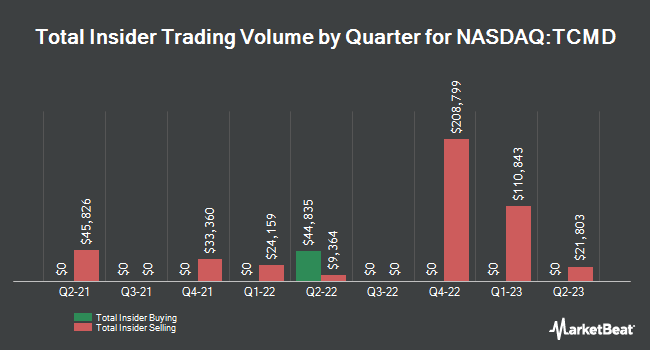 Complete the form below to receive the latest headlines and analysts' recommendations for Tactile Systems Technology with our free daily email newsletter: