Wall Street analysts expect Anterix Inc. (NASDAQ:ATEX – Get Rating) to announce $520,000.00 in sales for the current fiscal quarter, Zacks reports. Three analysts have made estimates for Anterix’s earnings, with the highest sales estimate coming in at $800,000.00 and the lowest estimate coming in at $370,000.00. Anterix posted sales of $180,000.00 during the same quarter last year, which suggests a positive year-over-year growth rate of 188.9%. The company is scheduled to report its next earnings results before the market opens on Monday, January 1st.

According to Zacks, analysts expect that Anterix will report full-year sales of $1.27 million for the current financial year, with estimates ranging from $1.12 million to $1.55 million. For the next fiscal year, analysts forecast that the business will report sales of $5.78 million, with estimates ranging from $3.02 million to $7.60 million. Zacks Investment Research’s sales calculations are a mean average based on a survey of analysts that cover Anterix.

A number of analysts recently weighed in on the stock. TheStreet cut shares of Anterix from a “c-” rating to a “d+” rating in a research report on Thursday, February 3rd. Morgan Stanley decreased their target price on Anterix from $65.00 to $63.00 and set an “equal weight” rating for the company in a research report on Thursday, February 10th. Finally, Zacks Investment Research downgraded Anterix from a “hold” rating to a “sell” rating in a report on Wednesday, April 6th. One investment analyst has rated the stock with a sell rating, one has assigned a hold rating and two have assigned a buy rating to the company’s stock. According to data from MarketBeat.com, the company currently has an average rating of “Hold” and a consensus target price of $63.00.

In other Anterix news, Chairman Morgan E. Obrien sold 25,000 shares of the business’s stock in a transaction on Tuesday, March 15th. The shares were sold at an average price of $56.02, for a total value of $1,400,500.00. The sale was disclosed in a document filed with the SEC, which is available at this link. Insiders own 4.05% of the company’s stock.

Anterix Inc operates as a wireless communications company. The company focuses on commercializing its spectrum assets to enable the targeted utility and critical infrastructure customers to deploy private broadband networks, technologies, and solutions. It holds licensed spectrum in the 900 MHz band with nationwide coverage throughout the United States, Alaska, Hawaii, and Puerto Rico. 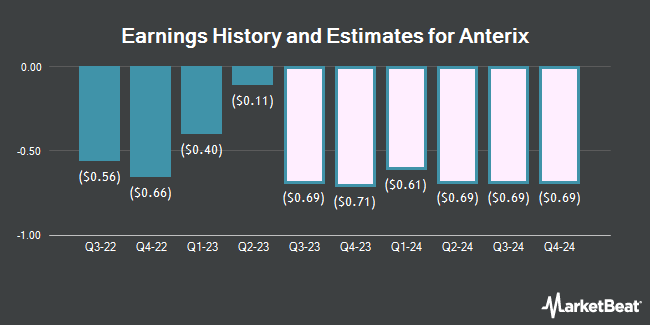 Receive News & Ratings for Anterix Daily - Enter your email address below to receive a concise daily summary of the latest news and analysts' ratings for Anterix and related companies with MarketBeat.com's FREE daily email newsletter.

Complete the form below to receive the latest headlines and analysts' recommendations for Anterix with our free daily email newsletter: