Brightcove Inc. (NASDAQ:BCOV – Get Rating) major shareholder Edenbrook Capital, Llc purchased 2,973 shares of the business’s stock in a transaction on Friday, May 20th. The shares were purchased at an average price of $6.85 per share, with a total value of $20,365.05. Following the completion of the purchase, the insider now owns 4,776,904 shares in the company, valued at $32,721,792.40. The transaction was disclosed in a document filed with the SEC, which is available through this hyperlink. Large shareholders that own at least 10% of a company’s stock are required to disclose their sales and purchases with the SEC.

Brightcove (NASDAQ:BCOV – Get Rating) last released its earnings results on Wednesday, April 27th. The software maker reported $0.10 EPS for the quarter, topping analysts’ consensus estimates of $0.04 by $0.06. Brightcove had a positive return on equity of 3.99% and a negative net margin of 0.65%. During the same quarter in the prior year, the business earned $0.10 earnings per share. On average, analysts expect that Brightcove Inc. will post -0.04 EPS for the current fiscal year.

About Brightcove (Get Rating) 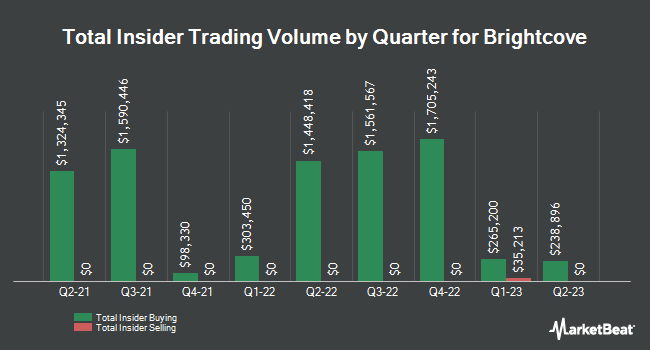 Allegion plc Given Average Recommendation of “Hold” by Analysts

Analyzing Standard BioTools and Its Peers

Complete the form below to receive the latest headlines and analysts' recommendations for Brightcove with our free daily email newsletter: