Jack in the Box (NASDAQ:JACK – Get Rating) last posted its quarterly earnings results on Wednesday, February 23rd. The restaurant operator reported $1.97 earnings per share for the quarter, topping analysts’ consensus estimates of $1.92 by $0.05. Jack in the Box had a net margin of 13.41% and a negative return on equity of 19.33%. The firm had revenue of $344.70 million for the quarter, compared to analyst estimates of $345.88 million. During the same period in the previous year, the business posted $2.16 earnings per share. Jack in the Box’s quarterly revenue was up 1.8% on a year-over-year basis.

The business also recently disclosed a quarterly dividend, which was paid on Tuesday, March 22nd. Stockholders of record on Wednesday, March 9th were paid a $0.44 dividend. This represents a $1.76 annualized dividend and a dividend yield of 2.57%. The ex-dividend date of this dividend was Tuesday, March 8th. Jack in the Box’s payout ratio is currently 25.07%.

In other Jack in the Box news, Director Michael W. Murphy sold 859 shares of the stock in a transaction dated Thursday, March 10th. The stock was sold at an average price of $83.11, for a total value of $71,391.49. The transaction was disclosed in a document filed with the SEC, which is available at this link. Company insiders own 1.10% of the company’s stock. 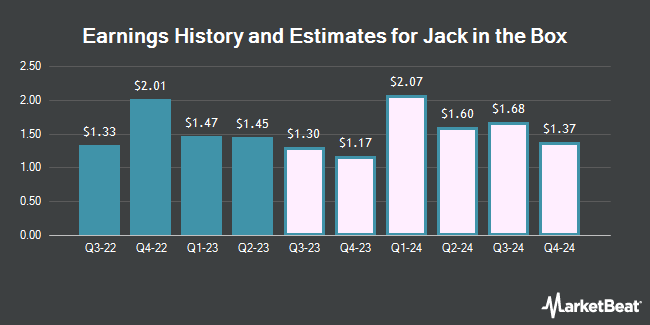