Brokerages expect The Hershey Company (NYSE:HSY – Get Rating) to report sales of $2.22 billion for the current fiscal quarter, Zacks reports. Six analysts have made estimates for Hershey’s earnings, with estimates ranging from $2.13 billion to $2.28 billion. Hershey posted sales of $1.99 billion during the same quarter last year, which indicates a positive year-over-year growth rate of 11.6%. The business is expected to issue its next earnings results on Monday, January 1st.

According to Zacks, analysts expect that Hershey will report full year sales of $9.97 billion for the current year, with estimates ranging from $9.77 billion to $10.08 billion. For the next financial year, analysts expect that the company will post sales of $10.30 billion, with estimates ranging from $10.00 billion to $10.52 billion. Zacks Investment Research’s sales averages are an average based on a survey of sell-side research analysts that cover Hershey.

Hershey (NYSE:HSY – Get Rating) last announced its quarterly earnings results on Thursday, April 28th. The company reported $2.53 earnings per share for the quarter, beating analysts’ consensus estimates of $2.10 by $0.43. The firm had revenue of $2.67 billion during the quarter, compared to analysts’ expectations of $2.49 billion. Hershey had a net margin of 17.29% and a return on equity of 61.65%. Hershey’s quarterly revenue was up 16.1% compared to the same quarter last year. During the same period in the previous year, the company earned $1.92 earnings per share.

The business also recently disclosed a quarterly dividend, which will be paid on Wednesday, June 15th. Investors of record on Friday, May 20th will be issued a dividend of $0.901 per share. This represents a $3.60 dividend on an annualized basis and a yield of 1.69%. The ex-dividend date of this dividend is Thursday, May 19th. Hershey’s dividend payout ratio is currently 46.27%.

About Hershey (Get Rating)

The Hershey Company, together with its subsidiaries, engages in the manufacture and sale of confectionery products and pantry items in the United States and internationally. The company operates through three segments: North America Confectionery, North America Salty Snacks, and International. It offers chocolate and non-chocolate confectionery products; gum and mint refreshment products, including mints, chewing gums, and bubble gums; pantry items, such as baking ingredients, toppings, beverages, and sundae syrups; and snack items comprising spreads, meat snacks, bars and snack bites, mixes, popcorn, and protein bars. 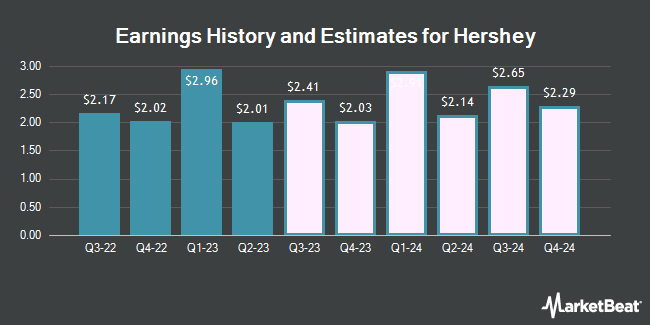 Receive News & Ratings for Hershey Daily - Enter your email address below to receive a concise daily summary of the latest news and analysts' ratings for Hershey and related companies with MarketBeat.com's FREE daily email newsletter.

Complete the form below to receive the latest headlines and analysts' recommendations for Hershey with our free daily email newsletter: