UDR (NYSE:UDR – Get Rating) had its target price reduced by stock analysts at Morgan Stanley from $56.00 to $51.00 in a research note issued to investors on Wednesday, Stock Target Advisor reports. The brokerage presently has an “equal weight” rating on the real estate investment trust’s stock. Morgan Stanley’s target price suggests a potential upside of 7.69% from the company’s current price.

UDR (NYSE:UDR – Get Rating) last posted its quarterly earnings data on Tuesday, April 26th. The real estate investment trust reported $0.04 EPS for the quarter, missing analysts’ consensus estimates of $0.55 by ($0.51). UDR had a return on equity of 4.79% and a net margin of 11.93%. During the same period in the prior year, the business earned $0.47 earnings per share. On average, sell-side analysts predict that UDR will post 2.3 earnings per share for the current fiscal year. 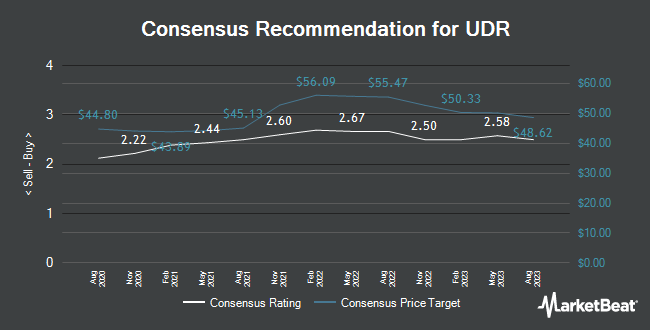