American Woodmark (NASDAQ:AMWD – Get Rating) posted its quarterly earnings data on Thursday. The company reported $1.38 earnings per share for the quarter, topping the consensus estimate of $1.34 by $0.04, MarketWatch Earnings reports. American Woodmark had a negative net margin of 2.26% and a positive return on equity of 7.22%. The company had revenue of $501.70 million for the quarter, compared to analysts’ expectations of $493.21 million. During the same period in the prior year, the business earned $1.28 earnings per share. American Woodmark’s revenue for the quarter was up 6.0% compared to the same quarter last year.

American Woodmark Corporation manufactures and distributes kitchen, bath, and home organization products for the remodelling and new home construction markets in the United States. It offers made-to-order and cash and carry products. The company also provides turnkey installation services to its direct builder customers through a network of eight service centers. 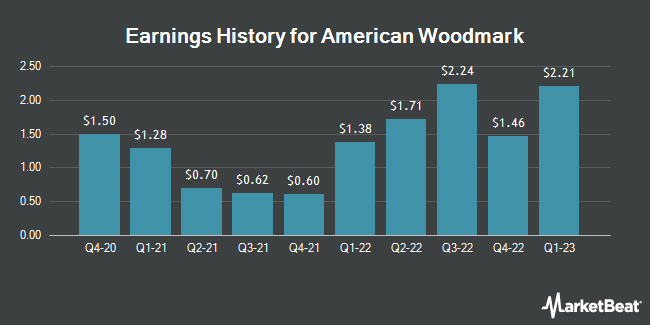 Complete the form below to receive the latest headlines and analysts' recommendations for American Woodmark with our free daily email newsletter: