Ferguson (NASDAQ:FERG – Get Rating) was downgraded by Zacks Investment Research from a “buy” rating to a “hold” rating in a research report issued to clients and investors on Wednesday, Zacks.com reports.

According to Zacks, “Ferguson plc is a distributor of plumbing and heating products to professional contractors and consumers primarily in the USA, UK, Nordics, Canada and Central Europe. Ferguson plc, formerly known as Wolseley plc, is headquartered in Zug, Switzerland. “

Ferguson (NASDAQ:FERG – Get Rating) last released its quarterly earnings data on Tuesday, March 15th. The company reported $1.93 earnings per share (EPS) for the quarter, topping the consensus estimate of $1.73 by $0.20. The business had revenue of $6.51 billion for the quarter, compared to analysts’ expectations of $6.04 billion. On average, analysts expect that Ferguson will post 8.87 earnings per share for the current year. 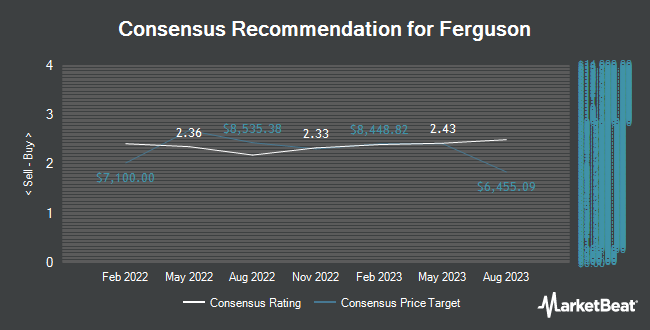