First Republic Bank (NYSE:FRC – Get Rating) had its price target lowered by stock analysts at Wolfe Research from $194.00 to $157.00 in a research report issued on Thursday, The Fly reports. Wolfe Research’s price objective would indicate a potential upside of 5.36% from the company’s previous close.

First Republic Bank (NYSE:FRC – Get Rating) last issued its quarterly earnings data on Wednesday, April 13th. The bank reported $2.00 earnings per share for the quarter, beating analysts’ consensus estimates of $1.90 by $0.10. First Republic Bank had a return on equity of 12.91% and a net margin of 27.93%. The business had revenue of $1.40 billion for the quarter, compared to the consensus estimate of $1.40 billion. During the same period last year, the business earned $1.79 EPS. The firm’s revenue was up 27.3% compared to the same quarter last year. On average, equities research analysts expect that First Republic Bank will post 8.4 earnings per share for the current fiscal year.

About First Republic Bank (Get Rating) 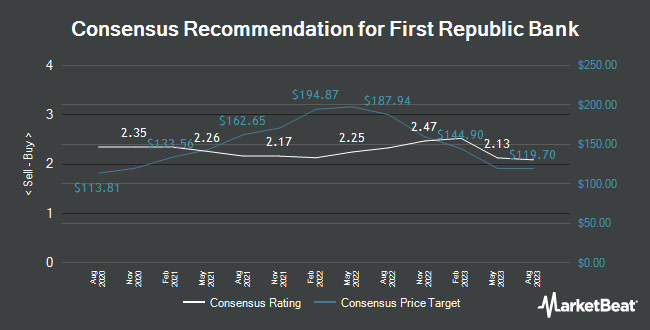