Analysts predict that First Solar, Inc. (NASDAQ:FSLR – Get Rating) will announce $594.71 million in sales for the current quarter, Zacks reports. Twelve analysts have provided estimates for First Solar’s earnings. The highest sales estimate is $670.00 million and the lowest is $438.50 million. First Solar posted sales of $629.18 million during the same quarter last year, which would indicate a negative year-over-year growth rate of 5.5%. The business is scheduled to announce its next quarterly earnings report on Monday, January 1st.

According to Zacks, analysts expect that First Solar will report full-year sales of $2.50 billion for the current fiscal year, with estimates ranging from $2.40 billion to $2.68 billion. For the next fiscal year, analysts forecast that the firm will post sales of $3.33 billion, with estimates ranging from $3.02 billion to $3.88 billion. Zacks Investment Research’s sales averages are an average based on a survey of analysts that follow First Solar.

First Solar (NASDAQ:FSLR – Get Rating) last issued its quarterly earnings data on Thursday, April 28th. The solar cell manufacturer reported ($0.41) EPS for the quarter, hitting the consensus estimate of ($0.41). First Solar had a net margin of 8.68% and a return on equity of 3.68%. The business had revenue of $367.00 million during the quarter, compared to analyst estimates of $588.73 million. During the same period in the prior year, the business earned $1.96 EPS. The company’s revenue for the quarter was down 54.3% on a year-over-year basis. 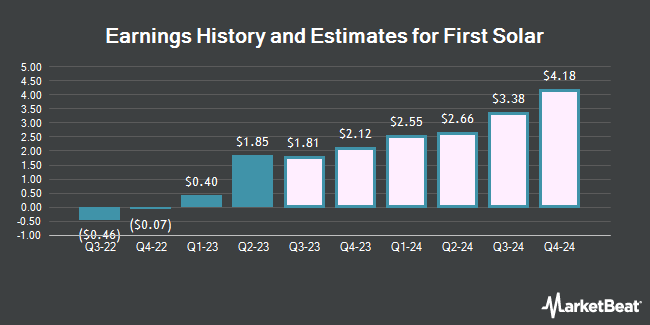 KeyCorp Shares Sold by State of Alaska Department of Revenue