Hess Co. (NYSE:HES – Get Rating) declared a quarterly dividend on Thursday, May 26th, RTT News reports. Stockholders of record on Wednesday, June 15th will be paid a dividend of 0.375 per share by the oil and gas producer on Thursday, June 30th. This represents a $1.50 annualized dividend and a dividend yield of 1.24%.

Hess has a dividend payout ratio of 14.6% indicating that its dividend is sufficiently covered by earnings. Equities analysts expect Hess to earn $13.44 per share next year, which means the company should continue to be able to cover its $1.50 annual dividend with an expected future payout ratio of 11.2%.

Hess (NYSE:HES – Get Rating) last posted its earnings results on Wednesday, April 27th. The oil and gas producer reported $1.30 EPS for the quarter, beating the consensus estimate of $1.12 by $0.18. The firm had revenue of $2.37 billion during the quarter, compared to the consensus estimate of $2.05 billion. Hess had a return on equity of 12.35% and a net margin of 9.01%. The business’s quarterly revenue was up 23.6% on a year-over-year basis. During the same period last year, the company earned $0.82 earnings per share. On average, sell-side analysts expect that Hess will post 9.61 earnings per share for the current fiscal year. 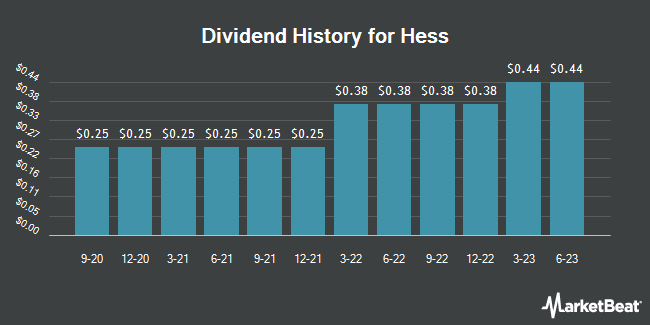