Titan Machinery (NASDAQ:TITN – Get Rating) posted its earnings results on Thursday. The company reported $0.79 EPS for the quarter, topping the consensus estimate of $0.53 by $0.26, MarketWatch Earnings reports. Titan Machinery had a net margin of 3.86% and a return on equity of 16.68%. The company had revenue of $461.10 million during the quarter, compared to the consensus estimate of $409.00 million. During the same period in the previous year, the firm posted $0.46 earnings per share. The company’s revenue for the quarter was up 23.7% compared to the same quarter last year. Titan Machinery updated its FY 2023 guidance to $2.85-$3.15 EPS and its FY23 guidance to $2.85-3.15 EPS.

A number of brokerages have recently issued reports on TITN. StockNews.com began coverage on shares of Titan Machinery in a research note on Thursday, March 31st. They issued a “strong-buy” rating for the company. Zacks Investment Research raised shares of Titan Machinery from a “hold” rating to a “buy” rating and set a $26.00 price objective on the stock in a report on Thursday. One equities research analyst has rated the stock with a hold rating, three have assigned a buy rating and one has given a strong buy rating to the company. According to MarketBeat.com, Titan Machinery has a consensus rating of “Buy” and a consensus target price of $36.75. 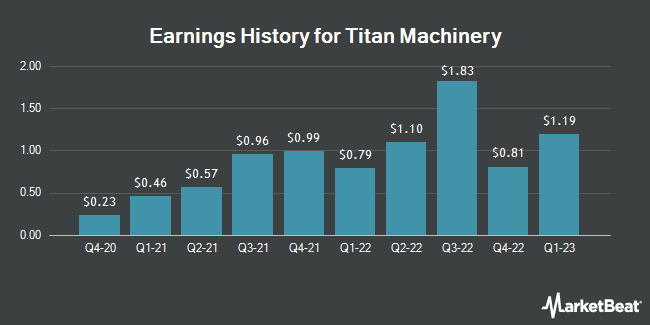 Retirement Systems of Alabama Has $7.44 Million Stock Position in RH

Complete the form below to receive the latest headlines and analysts' recommendations for Titan Machinery with our free daily email newsletter: