Brokerages expect that Freshpet, Inc. (NASDAQ:FRPT – Get Rating) will post $146.27 million in sales for the current quarter, Zacks reports. Seven analysts have provided estimates for Freshpet’s earnings, with estimates ranging from $145.18 million to $147.20 million. Freshpet posted sales of $108.62 million in the same quarter last year, which suggests a positive year over year growth rate of 34.7%. The company is expected to issue its next earnings report on Monday, January 1st.

According to Zacks, analysts expect that Freshpet will report full-year sales of $581.51 million for the current financial year, with estimates ranging from $577.91 million to $587.30 million. For the next financial year, analysts expect that the company will post sales of $760.67 million, with estimates ranging from $746.30 million to $801.23 million. Zacks’ sales averages are an average based on a survey of analysts that that provide coverage for Freshpet.

Freshpet (NASDAQ:FRPT – Get Rating) last issued its earnings results on Monday, May 2nd. The company reported ($0.40) earnings per share for the quarter, missing analysts’ consensus estimates of ($0.36) by ($0.04). The business had revenue of $132.17 million during the quarter, compared to analyst estimates of $126.26 million. Freshpet had a negative net margin of 7.83% and a negative return on equity of 5.06%. During the same period in the prior year, the business posted ($0.26) EPS. 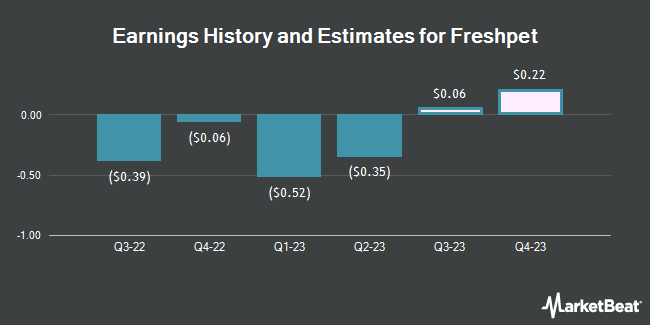