Several brokerages have recently issued reports on ZUO. Canaccord Genuity Group decreased their target price on shares of Zuora from $27.00 to $23.00 and set a buy rating on the stock in a research report on Thursday, March 3rd. Zacks Investment Research upgraded Zuora from a sell rating to a hold rating in a research report on Wednesday, May 4th. Three research analysts have rated the stock with a hold rating and four have given a buy rating to the company’s stock. Based on data from MarketBeat.com, Zuora currently has a consensus rating of Buy and a consensus price target of $22.71.

Zuora (NYSE:ZUO – Get Rating) last issued its quarterly earnings results on Wednesday, March 2nd. The company reported ($0.18) earnings per share for the quarter, missing the consensus estimate of ($0.16) by ($0.02). The business had revenue of $90.69 million during the quarter, compared to analysts’ expectations of $90.28 million. Zuora had a negative return on equity of 47.82% and a negative net margin of 28.67%. During the same quarter in the previous year, the company posted ($0.15) earnings per share. As a group, research analysts expect that Zuora will post -0.77 EPS for the current year.

About Zuora (Get Rating)

Zuora, Inc, together with its subsidiaries, provides cloud-based software on a subscription basis that enables companies in various industries to launch, manage, and transform into a subscription business. The company offers Zuora Central platform that acts as an orchestration engine that allows customers quote-to-revenue operations. 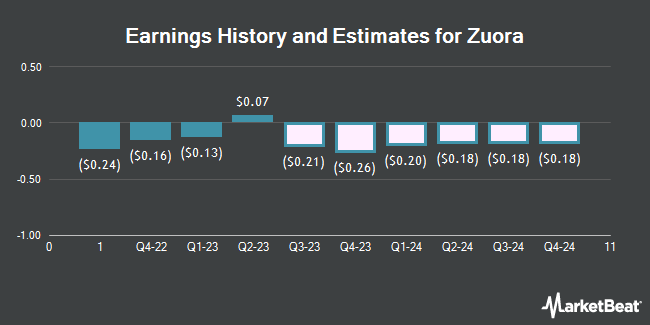 Receive News & Ratings for Zuora Daily - Enter your email address below to receive a concise daily summary of the latest news and analysts' ratings for Zuora and related companies with MarketBeat.com's FREE daily email newsletter.

Complete the form below to receive the latest headlines and analysts' recommendations for Zuora with our free daily email newsletter: