DENTSPLY SIRONA Inc. (NASDAQ:XRAY – Get Rating) declared a quarterly dividend on Friday, May 27th, RTT News reports. Stockholders of record on Friday, June 24th will be given a dividend of 0.125 per share by the medical instruments supplier on Friday, July 8th. This represents a $0.50 annualized dividend and a dividend yield of 1.28%.

DENTSPLY SIRONA (NASDAQ:XRAY – Get Rating) last issued its quarterly earnings results on Tuesday, May 10th. The medical instruments supplier reported $0.52 earnings per share (EPS) for the quarter, beating analysts’ consensus estimates of $0.50 by $0.02. The firm had revenue of $9.67 billion during the quarter, compared to analyst estimates of $982.05 million. DENTSPLY SIRONA had a return on equity of 11.63% and a net margin of 8.81%. The firm’s quarterly revenue was up 841.1% on a year-over-year basis. During the same period last year, the company posted $0.72 EPS. As a group, equities analysts anticipate that DENTSPLY SIRONA will post 2.41 EPS for the current year.

In other news, Director Eric Brandt sold 6,900 shares of the firm’s stock in a transaction dated Tuesday, May 3rd. The stock was sold at an average price of $39.71, for a total value of $273,999.00. Following the sale, the director now directly owns 35,155 shares of the company’s stock, valued at $1,396,005.05. The sale was disclosed in a document filed with the SEC, which is available at the SEC website. 0.76% of the stock is currently owned by company insiders.

About DENTSPLY SIRONA (Get Rating) 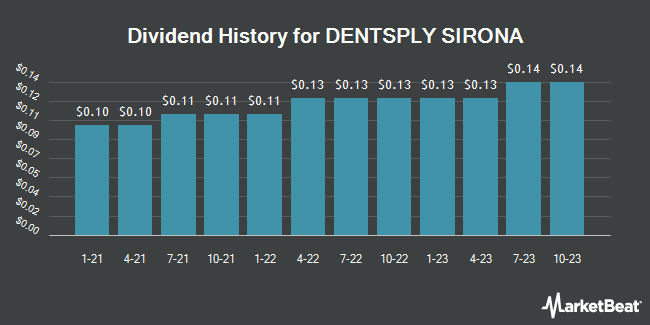