FS KKR Capital Corp. (NYSE:FSK – Get Rating) CEO Michael C. Forman bought 5,488 shares of the company’s stock in a transaction on Tuesday, May 24th. The stock was purchased at an average cost of $20.41 per share, with a total value of $112,010.08. Following the completion of the transaction, the chief executive officer now owns 5,488 shares in the company, valued at $112,010.08. The acquisition was disclosed in a legal filing with the SEC, which is available through this link.

FS KKR Capital (NYSE:FSK – Get Rating) last announced its quarterly earnings data on Monday, February 28th. The company reported $0.65 EPS for the quarter, topping analysts’ consensus estimates of $0.62 by $0.03. FS KKR Capital had a return on equity of 8.84% and a net margin of 116.21%. The business had revenue of $364.00 million during the quarter, compared to the consensus estimate of $344.46 million. On average, research analysts predict that FS KKR Capital Corp. will post 2.7 earnings per share for the current fiscal year.

The firm also recently declared a quarterly dividend, which will be paid on Tuesday, July 5th. Investors of record on Wednesday, June 15th will be issued a $0.68 dividend. This represents a $2.72 dividend on an annualized basis and a yield of 12.70%. This is an increase from FS KKR Capital’s previous quarterly dividend of $0.63. The ex-dividend date of this dividend is Tuesday, June 14th. FS KKR Capital’s dividend payout ratio is 31.00%.

FS KKR Capital Corp. is a business development company specializing in investments in debt securities. It invest primarily in the senior secured debt and, to a lesser extent, the subordinated debt of private middle market U.S. companies. It seeks to purchase interests in loans through secondary market transactions or directly from the target companies as primary market investments. 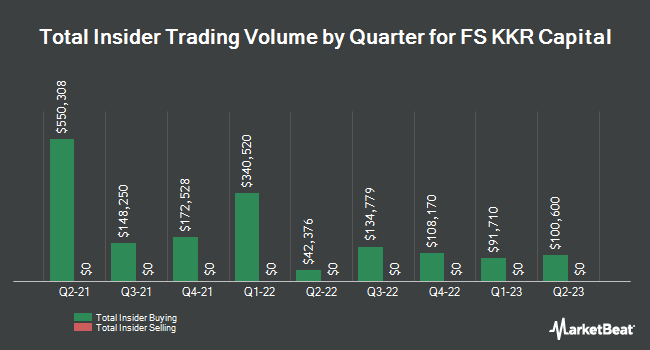 Complete the form below to receive the latest headlines and analysts' recommendations for FS KKR Capital with our free daily email newsletter: