Universal Co. (NYSE:UVV – Get Rating) declared a quarterly dividend on Wednesday, May 25th, Zacks reports. Shareholders of record on Monday, July 11th will be paid a dividend of 0.79 per share on Monday, August 1st. This represents a $3.16 annualized dividend and a yield of 5.04%. The ex-dividend date of this dividend is Friday, July 8th. This is a boost from Universal’s previous quarterly dividend of $0.78.

Separately, StockNews.com started coverage on Universal in a research report on Thursday, March 31st. They issued a “hold” rating on the stock. 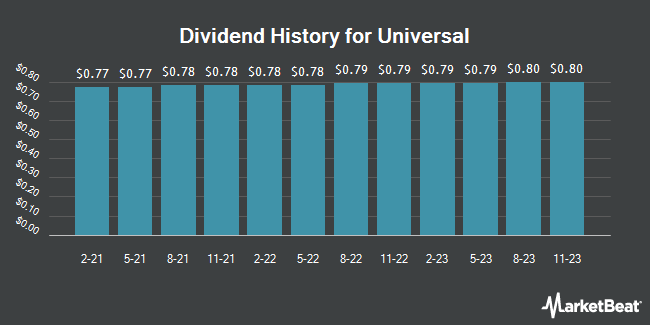 Complete the form below to receive the latest headlines and analysts' recommendations for Universal with our free daily email newsletter: