Shares of AutoNation, Inc. (NYSE:AN – Get Rating) have been given a consensus recommendation of “Buy” by the eight brokerages that are covering the firm, MarketBeat reports. Two equities research analysts have rated the stock with a hold rating, five have given a buy rating and one has issued a strong buy rating on the company. The average 12-month target price among analysts that have covered the stock in the last year is $146.71.

AutoNation (NYSE:AN – Get Rating) last announced its earnings results on Thursday, April 21st. The company reported $5.78 earnings per share (EPS) for the quarter, topping analysts’ consensus estimates of $5.39 by $0.39. The business had revenue of $6.75 billion during the quarter, compared to analysts’ expectations of $6.51 billion. AutoNation had a net margin of 5.60% and a return on equity of 59.93%. The firm’s revenue for the quarter was up 14.4% on a year-over-year basis. During the same quarter last year, the company posted $2.79 EPS. On average, equities analysts anticipate that AutoNation will post 22.16 earnings per share for the current year.

About AutoNation (Get Rating) 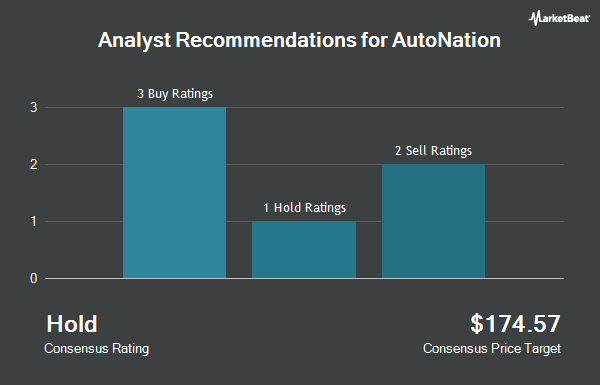