Jack in the Box (NASDAQ:JACK) Given New $107.00 Price Target at Truist Financial

Jack in the Box (NASDAQ:JACK – Get Rating) had its price objective trimmed by Truist Financial from $130.00 to $107.00 in a research note published on Friday morning, The Fly reports. The brokerage currently has a buy rating on the restaurant operator’s stock.

Jack in the Box (NASDAQ:JACK – Get Rating) last released its quarterly earnings data on Thursday, May 26th. The restaurant operator reported $1.16 EPS for the quarter, missing the consensus estimate of $1.36 by ($0.20). The business had revenue of $322.29 million during the quarter, compared to analysts’ expectations of $340.81 million. Jack in the Box had a net margin of 13.41% and a negative return on equity of 19.33%. The firm’s revenue was up 25.3% on a year-over-year basis. During the same period last year, the company earned $1.48 earnings per share. As a group, equities analysts forecast that Jack in the Box will post 6.58 earnings per share for the current year.

The company also recently disclosed a quarterly dividend, which will be paid on Wednesday, June 22nd. Investors of record on Tuesday, June 7th will be given a dividend of $0.44 per share. This represents a $1.76 annualized dividend and a yield of 2.63%. The ex-dividend date of this dividend is Monday, June 6th. Jack in the Box’s payout ratio is currently 25.07%.

In related news, Director Michael W. Murphy sold 859 shares of the firm’s stock in a transaction dated Thursday, March 10th. The shares were sold at an average price of $83.11, for a total transaction of $71,391.49. The transaction was disclosed in a legal filing with the Securities & Exchange Commission, which can be accessed through this hyperlink. 1.10% of the stock is currently owned by company insiders.

Jack in the Box Company Profile (Get Rating) 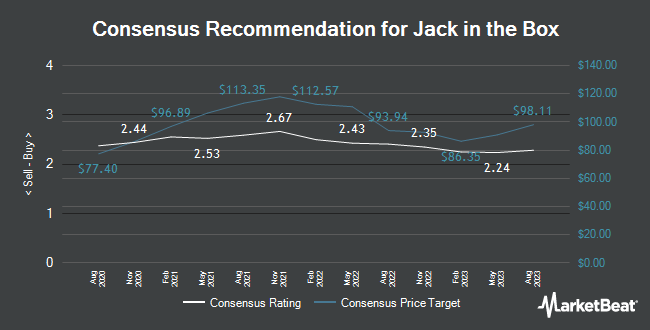