RBC Bearings (NASDAQ:ROLL – Get Rating) was upgraded by StockNews.com from a “sell” rating to a “hold” rating in a research note issued on Friday.

RBC Bearings (NASDAQ:ROLL – Get Rating) last issued its quarterly earnings results on Thursday, May 26th. The industrial products company reported $1.26 earnings per share (EPS) for the quarter, beating analysts’ consensus estimates of $1.07 by $0.19. RBC Bearings had a return on equity of 5.76% and a net margin of 7.77%. The firm had revenue of $358.90 million during the quarter, compared to the consensus estimate of $349.91 million. During the same quarter last year, the company posted $1.08 EPS. The company’s revenue for the quarter was up 123.9% on a year-over-year basis. On average, equities analysts anticipate that RBC Bearings will post 3.69 EPS for the current fiscal year.

In other RBC Bearings news, VP Patrick S. Bannon sold 6,306 shares of the company’s stock in a transaction that occurred on Wednesday, April 13th. The stock was sold at an average price of $180.07, for a total value of $1,135,521.42. Following the sale, the vice president now owns 12,591 shares in the company, valued at approximately $2,267,261.37. The transaction was disclosed in a legal filing with the SEC, which is available at the SEC website. Company insiders own 2.70% of the company’s stock.

About RBC Bearings (Get Rating) 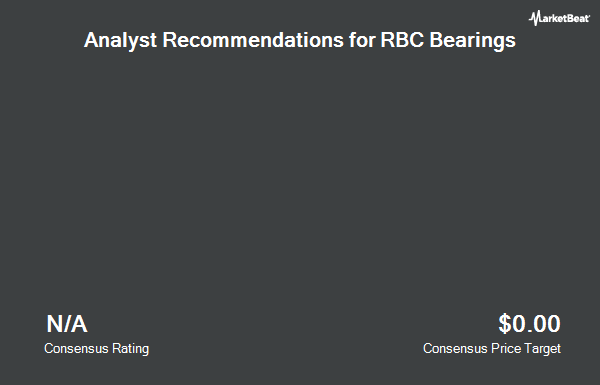