Capri (NYSE:CPRI – Get Rating) was downgraded by StockNews.com from a “buy” rating to a “hold” rating in a research note issued to investors on Friday.

Several other analysts have also issued reports on the company. Morgan Stanley boosted their target price on Capri from $75.00 to $80.00 and gave the company an “overweight” rating in a research note on Tuesday, February 8th. Zacks Investment Research downgraded shares of Capri from a “buy” rating to a “hold” rating and set a $52.00 price objective on the stock. in a report on Tuesday, April 12th. UBS Group lifted their target price on shares of Capri from $99.00 to $107.00 in a research note on Thursday, February 3rd. Credit Suisse Group raised their price objective on shares of Capri from $70.00 to $74.00 and gave the stock a “neutral” rating in a report on Thursday, February 3rd. Finally, Sanford C. Bernstein began coverage on shares of Capri in a report on Monday, March 14th. They set a “market perform” rating and a $55.00 target price on the stock. Six analysts have rated the stock with a hold rating and fifteen have assigned a buy rating to the company. According to data from MarketBeat.com, Capri currently has a consensus rating of “Buy” and an average price target of $77.33.

In other Capri news, SVP Daniel Purefoy sold 1,950 shares of the business’s stock in a transaction that occurred on Thursday, March 10th. The shares were sold at an average price of $50.80, for a total value of $99,060.00. The transaction was disclosed in a legal filing with the Securities & Exchange Commission, which is available at this link. 2.70% of the stock is currently owned by corporate insiders. 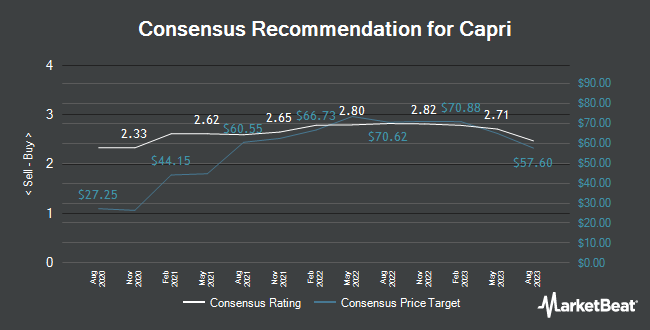