Shares of Sunoco LP (NYSE:SUN – Get Rating) have been assigned an average recommendation of “Hold” from the nine research firms that are presently covering the stock, Marketbeat.com reports. Four analysts have rated the stock with a hold rating and three have assigned a buy rating to the company. The average twelve-month price objective among brokerages that have issued ratings on the stock in the last year is $44.75.

Sunoco (NYSE:SUN – Get Rating) last released its quarterly earnings data on Wednesday, May 4th. The oil and gas company reported $2.32 earnings per share for the quarter, topping the consensus estimate of $0.88 by $1.44. The business had revenue of $5.40 billion during the quarter, compared to analyst estimates of $4.50 billion. Sunoco had a return on equity of 70.31% and a net margin of 3.00%. The company’s revenue was up 55.6% compared to the same quarter last year. During the same period last year, the company posted $1.60 EPS. On average, equities research analysts anticipate that Sunoco will post 6.66 EPS for the current fiscal year.

The business also recently announced a quarterly dividend, which was paid on Thursday, May 19th. Shareholders of record on Monday, May 9th were issued a dividend of $0.8255 per share. The ex-dividend date was Friday, May 6th. This represents a $3.30 annualized dividend and a yield of 7.92%. Sunoco’s dividend payout ratio (DPR) is currently 55.00%.

Sunoco LP, together with its subsidiaries, distributes and retails motor fuels in the United States. It operates in two segments, Fuel Distribution and Marketing, and All Other. The Fuel Distribution and Marketing segment purchases motor fuel from independent refiners and oil companies and supplies it to independently operated dealer stations, distributors and other consumer of motor fuel, and partnership operated stations, as well as to commission agent locations. 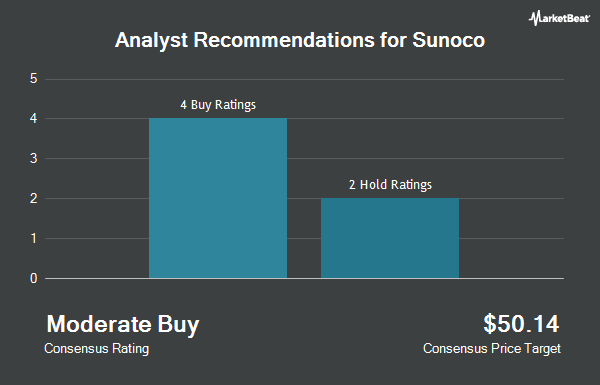 Receive News & Ratings for Sunoco Daily - Enter your email address below to receive a concise daily summary of the latest news and analysts' ratings for Sunoco and related companies with MarketBeat.com's FREE daily email newsletter.

Napco Security Technologies Upgraded to B- by TheStreet

Complete the form below to receive the latest headlines and analysts' recommendations for Sunoco with our free daily email newsletter: