Equities analysts expect that Chuy’s Holdings, Inc. (NASDAQ:CHUY – Get Rating) will post sales of $112.04 million for the current quarter, according to Zacks. Four analysts have issued estimates for Chuy’s’ earnings. The highest sales estimate is $113.23 million and the lowest is $110.58 million. Chuy’s posted sales of $108.15 million in the same quarter last year, which would indicate a positive year over year growth rate of 3.6%. The firm is expected to report its next earnings report on Monday, January 1st.

Chuy’s (NASDAQ:CHUY – Get Rating) last posted its quarterly earnings data on Thursday, May 5th. The restaurant operator reported $0.34 earnings per share (EPS) for the quarter, topping the consensus estimate of $0.30 by $0.04. Chuy’s had a return on equity of 13.89% and a net margin of 7.10%. The company had revenue of $100.50 million for the quarter, compared to analysts’ expectations of $98.35 million. During the same period in the previous year, the firm posted $0.42 EPS. Chuy’s’s revenue was up 14.6% compared to the same quarter last year.

CHUY has been the topic of several research analyst reports. Zacks Investment Research upgraded Chuy’s from a “sell” rating to a “hold” rating in a report on Friday. StockNews.com lowered shares of Chuy’s from a “buy” rating to a “hold” rating in a research note on Thursday, May 12th. Finally, Robert W. Baird raised their target price on shares of Chuy’s from $28.00 to $31.00 in a research note on Friday, February 18th. Three analysts have rated the stock with a hold rating and three have given a buy rating to the company. According to MarketBeat.com, the company has a consensus rating of “Buy” and a consensus target price of $36.17. 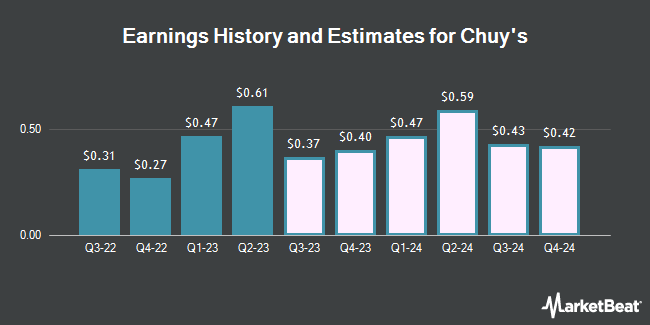 Wolfspeed Rating Increased to Buy at The Goldman Sachs Group