$30.00 Million in Sales Expected for Cellectis S.A. (NASDAQ:CLLS) This Quarter

Wall Street analysts predict that Cellectis S.A. (NASDAQ:CLLS – Get Rating) will report $30.00 million in sales for the current fiscal quarter, according to Zacks Investment Research. Two analysts have made estimates for Cellectis’ earnings, with the highest sales estimate coming in at $43.50 million and the lowest estimate coming in at $16.50 million. Cellectis posted sales of $14.62 million during the same quarter last year, which suggests a positive year over year growth rate of 105.2%. The firm is scheduled to announce its next quarterly earnings report on Monday, January 1st.

Cellectis (NASDAQ:CLLS – Get Rating) last announced its earnings results on Thursday, March 3rd. The biotechnology company reported ($0.55) earnings per share (EPS) for the quarter, beating the consensus estimate of ($1.05) by $0.50. The business had revenue of $13.66 million during the quarter, compared to analyst estimates of $12.30 million. Cellectis had a negative net margin of 312.64% and a negative return on equity of 53.48%. During the same period in the previous year, the business posted ($0.95) earnings per share.

Cellectis SA, a clinical stage biotechnological company, develops immuno-oncology products based on gene-edited T-cells that express chimeric antigen receptors to target and eradicate cancer cells. It operates through two segments, Therapeutics and Plants. The company is developing UCART19, an allogeneic T-cell product candidate for the treatment of CD19-expressing hematologic malignancies, such as acute lymphoblastic leukemia; ALLO-501 and ALLO-501A to treat relapsed/refractory diffuse large B-cell lymphoma and follicular lymphoma; ALLO-316 for the treatment of Renal Cell Carcinoma; UCART123 for the treatment of acute myeloid leukemia; and UCART22 to treat B-cell acute lymphoblastic leukemia. 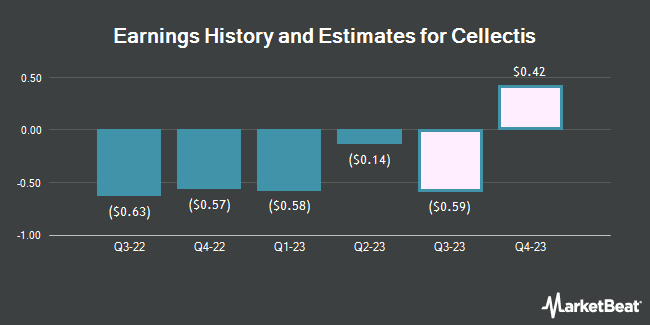 Complete the form below to receive the latest headlines and analysts' recommendations for Cellectis with our free daily email newsletter: