FutureFuel Corp. (NYSE:FF – Get Rating) declared a quarterly dividend on Friday, February 4th, Wall Street Journal reports. Investors of record on Wednesday, June 1st will be given a dividend of 0.06 per share by the energy company on Wednesday, June 15th. This represents a $0.24 dividend on an annualized basis and a yield of 3.27%. The ex-dividend date of this dividend is Tuesday, May 31st.

FutureFuel has raised its dividend payment by an average of 118.4% annually over the last three years.

FutureFuel (NYSE:FF – Get Rating) last released its earnings results on Monday, May 9th. The energy company reported ($0.28) EPS for the quarter. FutureFuel had a net margin of 7.03% and a return on equity of 8.39%. The business had revenue of $42.26 million during the quarter.

Separately, StockNews.com downgraded FutureFuel from a “strong-buy” rating to a “hold” rating in a research note on Thursday, May 19th.

About FutureFuel (Get Rating) 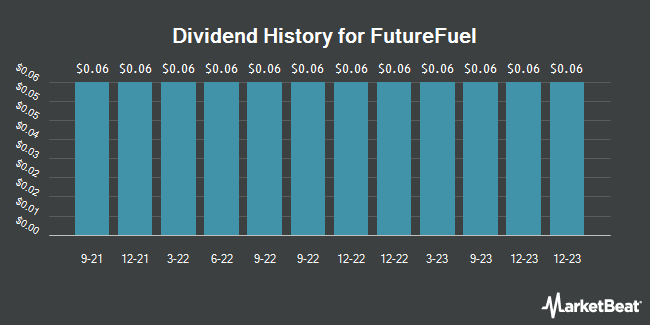 Complete the form below to receive the latest headlines and analysts' recommendations for FutureFuel with our free daily email newsletter: