Cooper Companies (NYSE:COO – Get Rating) posted its quarterly earnings results on Thursday. The medical device company reported $3.24 earnings per share for the quarter, missing the consensus estimate of $3.43 by ($0.19), MarketWatch Earnings reports. The company had revenue of $829.80 million during the quarter, compared to analysts’ expectations of $821.03 million. Cooper Companies had a return on equity of 9.89% and a net margin of 31.00%. The business’s quarterly revenue was up 15.3% on a year-over-year basis. During the same quarter in the previous year, the company earned $3.38 EPS. Cooper Companies updated its FY 2022 guidance to $13.09-$13.29 EPS and its FY22 guidance to $13.09-13.29 EPS.

The Cooper Companies, Inc, together with its subsidiaries, develops, manufactures, and markets contact lens wearers. The company operates in two segments, CooperVision and CooperSurgical. The CooperVision segment offers spherical lense, including lenses that correct near and farsightedness; and toric and multifocal lenses comprising lenses correcting vision challenges, such as astigmatism, presbyopia, myopia, ocular dryness and eye fatigues in the Americas, Europe, Middle East, Africa, and Asia Pacific. 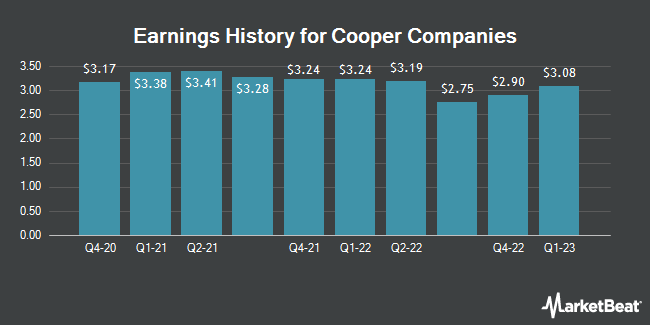 Complete the form below to receive the latest headlines and analysts' recommendations for Cooper Companies with our free daily email newsletter: