Palo Alto Networks, Inc. (NASDAQ:PANW – Get Rating) EVP Nir Zuk sold 12,000 shares of Palo Alto Networks stock in a transaction that occurred on Wednesday, June 1st. The stock was sold at an average price of $506.01, for a total transaction of $6,072,120.00. Following the completion of the transaction, the executive vice president now owns 696,273 shares in the company, valued at approximately $352,321,100.73. The transaction was disclosed in a legal filing with the Securities & Exchange Commission, which is accessible through this hyperlink.

Palo Alto Networks (NASDAQ:PANW – Get Rating) last posted its quarterly earnings data on Thursday, May 19th. The network technology company reported ($0.61) earnings per share (EPS) for the quarter, missing the consensus estimate of ($0.40) by ($0.21). Palo Alto Networks had a negative return on equity of 57.50% and a negative net margin of 7.54%. The company had revenue of $1.39 billion for the quarter, compared to the consensus estimate of $1.36 billion. During the same quarter in the previous year, the firm posted ($0.62) EPS. The business’s revenue for the quarter was up 29.1% compared to the same quarter last year. As a group, equities analysts expect that Palo Alto Networks, Inc. will post -0.73 EPS for the current year. 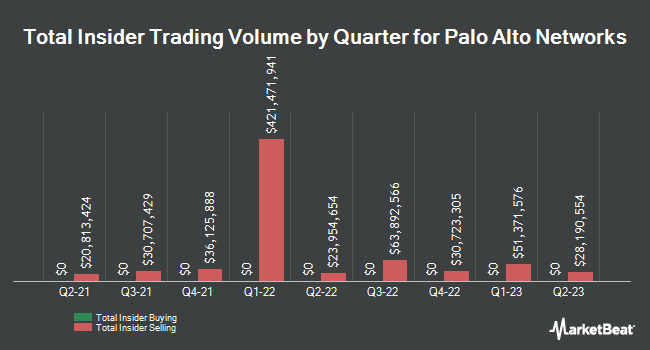