Wall Street analysts expect that VICI Properties Inc. (NYSE:VICI – Get Rating) will post sales of $601.68 million for the current quarter, according to Zacks Investment Research. Six analysts have made estimates for VICI Properties’ earnings, with estimates ranging from $582.80 million to $621.00 million. VICI Properties reported sales of $376.40 million during the same quarter last year, which would suggest a positive year-over-year growth rate of 59.9%. The business is expected to issue its next earnings results on Monday, January 1st.

According to Zacks, analysts expect that VICI Properties will report full year sales of $2.44 billion for the current financial year, with estimates ranging from $2.36 billion to $2.67 billion. For the next financial year, analysts expect that the company will report sales of $2.89 billion, with estimates ranging from $2.76 billion to $3.41 billion. Zacks’ sales calculations are a mean average based on a survey of sell-side research analysts that that provide coverage for VICI Properties.

VICI Properties (NYSE:VICI – Get Rating) last posted its quarterly earnings data on Wednesday, May 4th. The company reported $0.35 earnings per share (EPS) for the quarter, missing analysts’ consensus estimates of $0.44 by ($0.09). The firm had revenue of $416.20 million for the quarter, compared to analysts’ expectations of $410.84 million. VICI Properties had a return on equity of 10.42% and a net margin of 63.44%. VICI Properties’s revenue was up 11.2% compared to the same quarter last year. During the same period in the prior year, the firm earned $0.47 earnings per share.

A number of equities research analysts recently issued reports on the company. JPMorgan Chase & Co. assumed coverage on VICI Properties in a research note on Tuesday, May 3rd. They issued an “overweight” rating on the stock. Citigroup began coverage on VICI Properties in a research note on Monday, February 7th. They issued a “buy” rating and a $32.00 price objective on the stock. The Goldman Sachs Group upped their price target on VICI Properties from $35.00 to $39.00 and gave the company a “buy” rating in a research report on Thursday, May 19th. Finally, Zacks Investment Research raised VICI Properties from a “sell” rating to a “hold” rating in a report on Tuesday, March 1st. Two equities research analysts have rated the stock with a hold rating and eleven have given a buy rating to the company. According to MarketBeat, the company presently has a consensus rating of “Buy” and a consensus target price of $36.00.

The company also recently announced a quarterly dividend, which was paid on Thursday, April 7th. Shareholders of record on Thursday, March 24th were paid a $0.36 dividend. This represents a $1.44 annualized dividend and a yield of 4.59%. The ex-dividend date of this dividend was Wednesday, March 23rd. VICI Properties’s dividend payout ratio is currently 89.44%.

In other news, Director Michael D. Rumbolz bought 2,000 shares of the business’s stock in a transaction on Tuesday, March 8th. The stock was acquired at an average price of $26.88 per share, with a total value of $53,760.00. The transaction was disclosed in a filing with the Securities & Exchange Commission, which is available through this link. 0.22% of the stock is owned by corporate insiders. 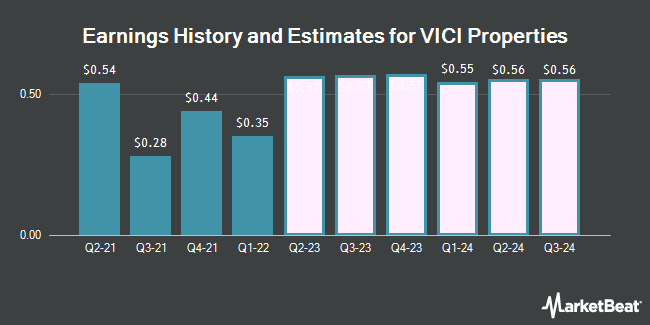