Wall Street brokerages expect that Insmed Incorporated (NASDAQ:INSM – Get Rating) will post sales of $58.83 million for the current fiscal quarter, according to Zacks Investment Research. Six analysts have issued estimates for Insmed’s earnings, with estimates ranging from $55.76 million to $61.62 million. Insmed posted sales of $45.37 million in the same quarter last year, which would indicate a positive year over year growth rate of 29.7%. The company is expected to announce its next earnings results on Monday, January 1st.

On average, analysts expect that Insmed will report full-year sales of $251.28 million for the current financial year, with estimates ranging from $245.10 million to $258.67 million. For the next year, analysts anticipate that the company will report sales of $342.90 million, with estimates ranging from $324.10 million to $375.29 million. Zacks Investment Research’s sales averages are a mean average based on a survey of sell-side research analysts that that provide coverage for Insmed.

Insmed (NASDAQ:INSM – Get Rating) last announced its earnings results on Thursday, May 5th. The biopharmaceutical company reported ($0.80) earnings per share for the quarter, beating the consensus estimate of ($0.91) by $0.11. Insmed had a negative net margin of 217.35% and a negative return on equity of 108.20%. The company had revenue of $53.10 million during the quarter, compared to the consensus estimate of $53.36 million. During the same period last year, the firm earned ($0.89) earnings per share. Insmed’s revenue was up 32.1% compared to the same quarter last year.

In other Insmed news, CEO William Lewis sold 96,614 shares of the firm’s stock in a transaction dated Wednesday, March 23rd. The shares were sold at an average price of $23.16, for a total transaction of $2,237,580.24. The transaction was disclosed in a filing with the Securities & Exchange Commission, which is available through the SEC website. Also, Director Melvin Md Sharoky bought 20,000 shares of the company’s stock in a transaction on Wednesday, May 11th. The shares were acquired at an average price of $17.20 per share, with a total value of $344,000.00. Following the completion of the acquisition, the director now directly owns 262,621 shares in the company, valued at approximately $4,517,081.20. The disclosure for this purchase can be found here. 4.63% of the stock is currently owned by corporate insiders. 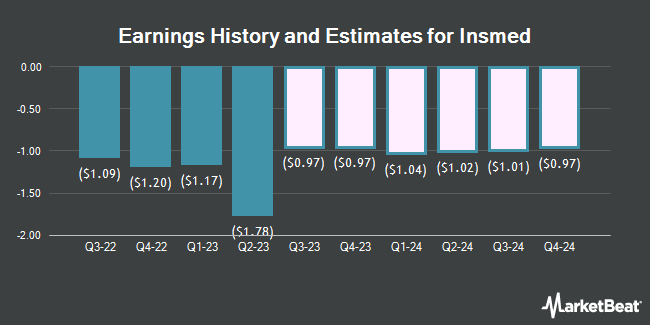