According to Zacks, analysts expect that First Citizens BancShares will report full-year sales of $4.39 billion for the current financial year, with estimates ranging from $4.34 billion to $4.44 billion. For the next year, analysts forecast that the company will post sales of $4.08 billion, with estimates ranging from $3.99 billion to $4.18 billion. Zacks’ sales averages are a mean average based on a survey of sell-side research firms that cover First Citizens BancShares.

First Citizens BancShares (NASDAQ:FCNCA – Get Rating) last announced its quarterly earnings results on Thursday, April 28th. The bank reported $16.70 EPS for the quarter, beating analysts’ consensus estimates of $13.48 by $3.22. First Citizens BancShares had a return on equity of 15.76% and a net margin of 22.17%. The company had revenue of $1.50 billion during the quarter, compared to analysts’ expectations of $1.15 billion. During the same period in the prior year, the business posted $14.53 EPS.

The business also recently disclosed a quarterly dividend, which will be paid on Wednesday, June 15th. Investors of record on Tuesday, May 31st will be given a $0.47 dividend. The ex-dividend date is Friday, May 27th. This represents a $1.88 annualized dividend and a yield of 0.27%. First Citizens BancShares’s dividend payout ratio is currently 3.35%. 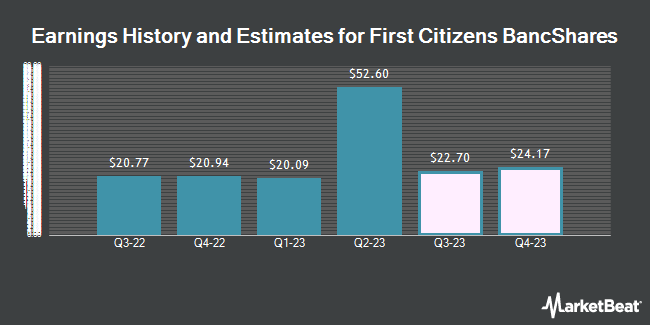 Puma Given a €100.00 Price Target by Hauck Aufhäuser In… Analysts

JOST Werke Given a €71.00 Price Target at Hauck Aufhäuser In…

HelloFresh Given a €70.00 Price Target by Deutsche Bank Rese… Analysts

Complete the form below to receive the latest headlines and analysts' recommendations for First Citizens BancShares with our free daily email newsletter: