ON Semiconductor Corp (NASDAQ:ON) Given Average Recommendation of “Buy” by Brokerages

ON Semiconductor Corp (NASDAQ:ON – Get Rating) has received a consensus rating of “Buy” from the twenty-seven brokerages that are currently covering the firm, Marketbeat.com reports. One equities research analyst has rated the stock with a sell rating, six have assigned a hold rating, eighteen have given a buy rating and one has issued a strong buy rating on the company. The average 12 month price target among analysts that have covered the stock in the last year is $69.58.

ON Semiconductor (NASDAQ:ON – Get Rating) last issued its quarterly earnings data on Monday, May 2nd. The semiconductor company reported $1.22 EPS for the quarter, beating analysts’ consensus estimates of $1.05 by $0.17. The firm had revenue of $1.95 billion for the quarter, compared to analysts’ expectations of $1.91 billion. ON Semiconductor had a net margin of 20.13% and a return on equity of 38.08%. The firm’s revenue was up 31.3% on a year-over-year basis. During the same period in the prior year, the company earned $0.35 EPS. As a group, sell-side analysts forecast that ON Semiconductor will post 4.91 EPS for the current fiscal year. 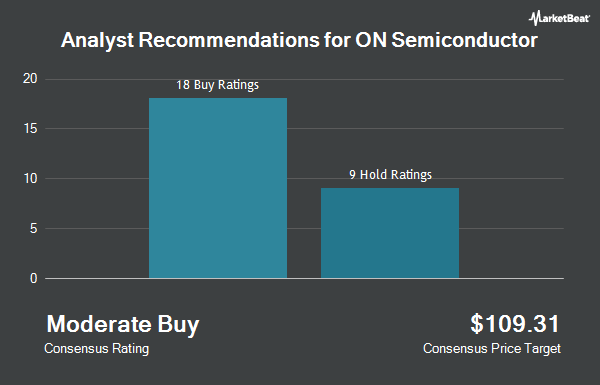