MarketAxess Holdings Inc. (NASDAQ:MKTX – Get Rating) insider Christophe Pierre Danie Roupie sold 1,740 shares of the stock in a transaction that occurred on Tuesday, June 7th. The stock was sold at an average price of $285.03, for a total value of $495,952.20. Following the completion of the transaction, the insider now owns 5,318 shares in the company, valued at approximately $1,515,789.54. The sale was disclosed in a filing with the Securities & Exchange Commission, which is accessible through this link.

MarketAxess (NASDAQ:MKTX – Get Rating) last released its quarterly earnings data on Wednesday, April 20th. The financial services provider reported $1.73 earnings per share (EPS) for the quarter, beating the consensus estimate of $1.70 by $0.03. The business had revenue of $186.10 million for the quarter, compared to analysts’ expectations of $186.34 million. MarketAxess had a return on equity of 23.46% and a net margin of 35.13%. The firm’s quarterly revenue was down 4.8% on a year-over-year basis. During the same period in the prior year, the firm posted $2.11 EPS. As a group, research analysts forecast that MarketAxess Holdings Inc. will post 7.02 earnings per share for the current fiscal year.

The firm also recently declared a quarterly dividend, which was paid on Wednesday, May 18th. Shareholders of record on Wednesday, May 4th were paid a $0.70 dividend. The ex-dividend date of this dividend was Tuesday, May 3rd. This represents a $2.80 dividend on an annualized basis and a yield of 1.02%. MarketAxess’s payout ratio is presently 43.96%. 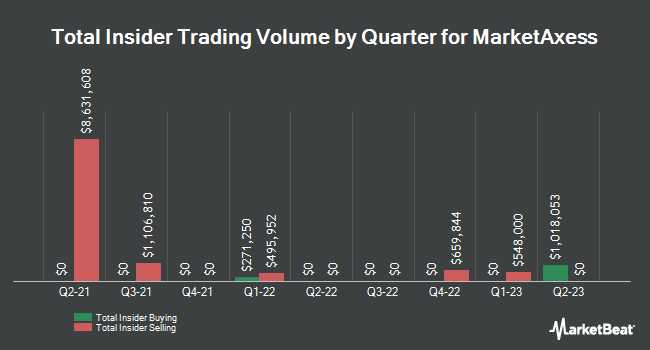