ACV Auctions (NASDAQ:ACVA – Get Rating) had its price target dropped by stock analysts at The Goldman Sachs Group from $20.00 to $14.00 in a research note issued to investors on Thursday, The Fly reports. The Goldman Sachs Group’s target price indicates a potential upside of 85.19% from the company’s current price.

In other ACV Auctions news, insider Michael Waterman sold 2,931 shares of the company’s stock in a transaction that occurred on Monday, May 2nd. The stock was sold at an average price of $12.75, for a total value of $37,370.25. Following the completion of the sale, the insider now directly owns 66,964 shares in the company, valued at $853,791. The transaction was disclosed in a legal filing with the Securities & Exchange Commission, which is accessible through the SEC website. Corporate insiders own 11.64% of the company’s stock.

About ACV Auctions (Get Rating)

ACV Auctions Inc operates a digital marketplace that connects buyers and sellers for the online auction of wholesale vehicles. It also provides data services that offer insights into the condition and value of used vehicles, as well as offers customer financing services. ACV Auctions Inc was incorporated in 2014 and is headquartered in Buffalo, New York. 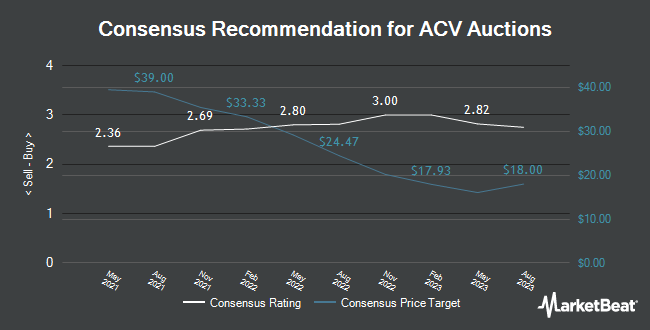 Complete the form below to receive the latest headlines and analysts' recommendations for ACV Auctions with our free daily email newsletter: