Spectrum Pharmaceuticals (NASDAQ:SPPI – Get Rating) last announced its quarterly earnings data on Thursday, March 17th. The biotechnology company reported ($0.26) earnings per share for the quarter, missing the consensus estimate of ($0.21) by ($0.05). During the same period in the prior year, the business earned ($0.36) earnings per share.

About Spectrum Pharmaceuticals (Get Rating)

Spectrum Pharmaceuticals, Inc, a biopharmaceutical company, develops and commercializes oncology and hematology drug products. The company's products under development include Eflapegrastim, a novel long-acting granulocyte colony-stimulating factor for chemotherapy-induced neutropenia; Poziotinib, a novel irreversible tyrosine kinase inhibitor for non-small cell lung cancer tumors with various mutations; and Anti-CD20-IFNa, an antibody-interferon fusion molecule directed against CD20 that is in Phase I development for the treatment of patients with relapsed or refractory non-Hodgkin's lymphoma, including diffuse large B-cell lymphoma. 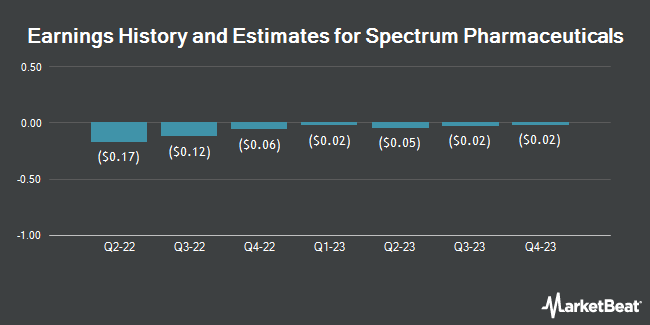 Complete the form below to receive the latest headlines and analysts' recommendations for Spectrum Pharmaceuticals with our free daily email newsletter: