The Southern Company (NYSE:SO – Get Rating) CEO Stephen E. Kuczynski sold 14,500 shares of the company’s stock in a transaction dated Friday, June 10th. The stock was sold at an average price of $72.08, for a total value of $1,045,160.00. Following the completion of the transaction, the chief executive officer now directly owns 115,284 shares of the company’s stock, valued at approximately $8,309,670.72. The transaction was disclosed in a filing with the SEC, which is available at the SEC website.

Southern (NYSE:SO – Get Rating) last issued its quarterly earnings data on Thursday, April 28th. The utilities provider reported $0.97 earnings per share (EPS) for the quarter, topping the consensus estimate of $0.91 by $0.06. The company had revenue of $6.60 billion for the quarter, compared to analyst estimates of $5.93 billion. Southern had a return on equity of 11.35% and a net margin of 10.09%. The business’s quarterly revenue was up 11.7% compared to the same quarter last year. During the same quarter last year, the company posted $0.98 earnings per share. As a group, equities analysts forecast that The Southern Company will post 3.56 earnings per share for the current year.

The business also recently declared a quarterly dividend, which was paid on Monday, June 6th. Investors of record on Monday, May 16th were issued a dividend of $0.68 per share. The ex-dividend date of this dividend was Friday, May 13th. This represents a $2.72 dividend on an annualized basis and a dividend yield of 3.88%. This is a positive change from Southern’s previous quarterly dividend of $0.66. Southern’s dividend payout ratio (DPR) is currently 125.93%. 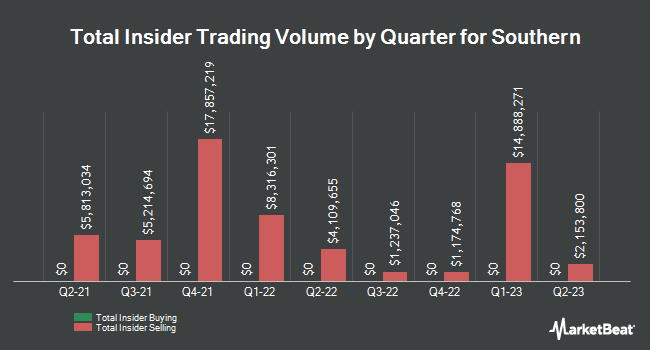