Pulmonx Co. (NASDAQ:LUNG) Given Average Recommendation of “Buy” by Analysts

Pulmonx Co. (NASDAQ:LUNG – Get Rating) has earned a consensus rating of “Buy” from the seven research firms that are presently covering the stock, Marketbeat reports. Three equities research analysts have rated the stock with a hold recommendation and three have issued a buy recommendation on the company. The average 1-year price objective among analysts that have issued a report on the stock in the last year is $34.29.

In other Pulmonx news, CEO Glendon E. French III sold 2,523 shares of the business’s stock in a transaction that occurred on Wednesday, June 1st. The stock was sold at an average price of $18.05, for a total transaction of $45,540.15. Following the transaction, the chief executive officer now owns 1,104,994 shares of the company’s stock, valued at approximately $19,945,141.70. The transaction was disclosed in a legal filing with the Securities & Exchange Commission, which can be accessed through the SEC website. Insiders have sold a total of 4,599 shares of company stock worth $83,012 in the last ninety days. Insiders own 8.50% of the company’s stock.

Pulmonx (NASDAQ:LUNG – Get Rating) last issued its earnings results on Tuesday, May 3rd. The company reported ($0.43) earnings per share (EPS) for the quarter, missing analysts’ consensus estimates of ($0.37) by ($0.06). Pulmonx had a negative return on equity of 26.08% and a negative net margin of 102.87%. The company had revenue of $10.79 million for the quarter, compared to the consensus estimate of $9.26 million. During the same quarter last year, the business posted ($0.34) EPS. Pulmonx’s quarterly revenue was up 16.7% on a year-over-year basis. As a group, equities analysts forecast that Pulmonx will post -1.6 EPS for the current year.

Pulmonx Corporation, a medical technology company, provides minimally invasive devices for the treatment of chronic obstructive pulmonary diseases. It offers Zephyr Endobronchial Valve, a solution for the treatment of bronchoscopic in adult patients with hyperinflation associated with severe emphysema; and Chartis Pulmonary Assessment System, a balloon catheter and console system with flow and pressure sensors that are used to assess the presence of collateral ventilation. 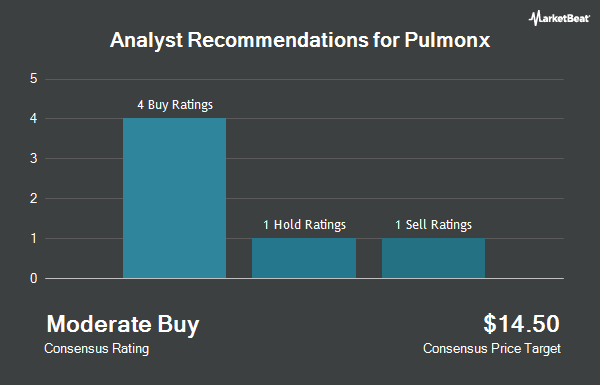 Receive News & Ratings for Pulmonx Daily - Enter your email address below to receive a concise daily summary of the latest news and analysts' ratings for Pulmonx and related companies with MarketBeat.com's FREE daily email newsletter.

Complete the form below to receive the latest headlines and analysts' recommendations for Pulmonx with our free daily email newsletter: