Fathom Holdings Inc. (NASDAQ:FTHM – Get Rating) CFO Marco Fregenal acquired 20,000 shares of the company’s stock in a transaction dated Monday, June 13th. The shares were purchased at an average price of $9.12 per share, with a total value of $182,400.00. Following the completion of the acquisition, the chief financial officer now owns 1,166,080 shares in the company, valued at $10,634,649.60. The purchase was disclosed in a filing with the SEC, which is available at this link.

Fathom (NASDAQ:FTHM – Get Rating) last posted its quarterly earnings data on Wednesday, May 4th. The company reported ($0.37) earnings per share for the quarter, beating analysts’ consensus estimates of ($0.40) by $0.03. The company had revenue of $90.08 million during the quarter, compared to analysts’ expectations of $77.55 million. Fathom had a negative net margin of 4.07% and a negative return on equity of 22.96%. During the same period in the prior year, the company posted ($0.25) EPS. Analysts forecast that Fathom Holdings Inc. will post -1.11 earnings per share for the current year.

Separately, Roth Capital decreased their price target on shares of Fathom from $40.00 to $23.00 in a research report on Wednesday, March 9th. 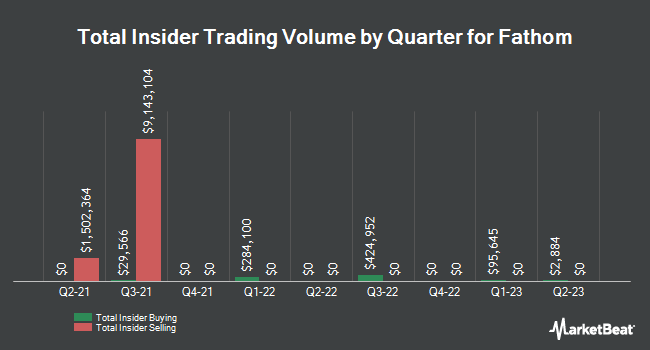 Receive News & Ratings for Fathom Daily - Enter your email address below to receive a concise daily summary of the latest news and analysts' ratings for Fathom and related companies with MarketBeat.com's FREE daily email newsletter.

State of Alaska Department of Revenue Has $3.80 Million Holdings in STAG Industrial, Inc.

Complete the form below to receive the latest headlines and analysts' recommendations for Fathom with our free daily email newsletter: