MediaAlpha, Inc. (NYSE:MAX – Get Rating) insider Patrick Ryan Thompson bought 10,000 shares of MediaAlpha stock in a transaction on Tuesday, June 14th. The shares were acquired at an average cost of $8.59 per share, with a total value of $85,900.00. Following the completion of the acquisition, the insider now owns 83,552 shares of the company’s stock, valued at approximately $717,711.68. The purchase was disclosed in a filing with the Securities & Exchange Commission, which is accessible through the SEC website.

MediaAlpha (NYSE:MAX – Get Rating) last issued its quarterly earnings results on Thursday, May 5th. The company reported ($0.17) earnings per share (EPS) for the quarter, missing analysts’ consensus estimates of ($0.10) by ($0.07). The company had revenue of $142.60 million during the quarter, compared to the consensus estimate of $141.20 million. During the same period in the previous year, the company posted $0.04 EPS. The firm’s revenue was down 17.9% compared to the same quarter last year. Equities analysts expect that MediaAlpha, Inc. will post -0.59 EPS for the current fiscal year. 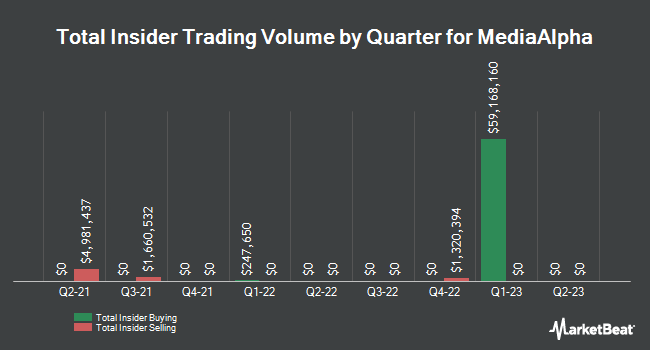 Complete the form below to receive the latest headlines and analysts' recommendations for MediaAlpha with our free daily email newsletter: