Invesco Ltd. (NYSE:IVZ – Get Rating) major shareholder Mm Asset Management Holding Ll purchased 827,590 shares of the company’s stock in a transaction that occurred on Monday, June 13th. The shares were purchased at an average price of $16.08 per share, for a total transaction of $13,307,647.20. Following the completion of the transaction, the insider now directly owns 80,504,729 shares of the company’s stock, valued at $1,294,516,042.32. The acquisition was disclosed in a document filed with the SEC, which is available through this hyperlink. Major shareholders that own 10% or more of a company’s stock are required to disclose their sales and purchases with the SEC.

Invesco (NYSE:IVZ – Get Rating) last posted its quarterly earnings results on Tuesday, April 26th. The asset manager reported $0.56 earnings per share for the quarter, missing the consensus estimate of $0.61 by ($0.05). Invesco had a return on equity of 13.70% and a net margin of 22.72%. The business had revenue of $1.63 billion during the quarter, compared to analysts’ expectations of $1.28 billion. During the same quarter in the prior year, the firm earned $0.68 EPS. The firm’s revenue for the quarter was down 1.9% compared to the same quarter last year. As a group, equities analysts anticipate that Invesco Ltd. will post 2.47 EPS for the current year.

The firm also recently declared a quarterly dividend, which was paid on Thursday, June 2nd. Stockholders of record on Tuesday, May 10th were paid a $0.188 dividend. The ex-dividend date of this dividend was Monday, May 9th. This represents a $0.75 annualized dividend and a dividend yield of 4.58%. This is a boost from Invesco’s previous quarterly dividend of $0.17. Invesco’s payout ratio is currently 26.32%. 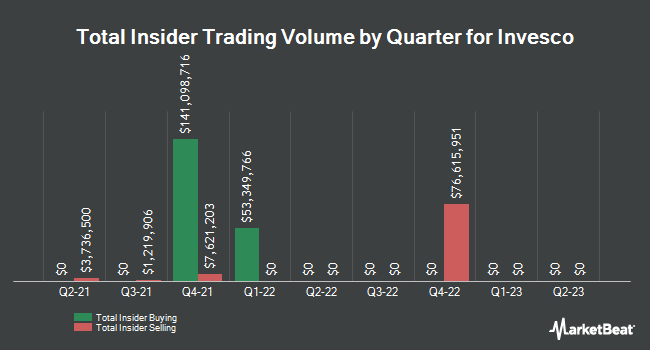