Patterson-UTI Energy, Inc. (NASDAQ:PTEN – Get Rating) CEO William Andrew Hendricks, Jr. sold 200,000 shares of Patterson-UTI Energy stock in a transaction that occurred on Friday, June 10th. The shares were sold at an average price of $18.07, for a total value of $3,614,000.00. Following the completion of the transaction, the chief executive officer now owns 1,901,374 shares of the company’s stock, valued at $34,357,828.18. The sale was disclosed in a legal filing with the Securities & Exchange Commission, which can be accessed through the SEC website.

Patterson-UTI Energy (NASDAQ:PTEN – Get Rating) last issued its quarterly earnings results on Wednesday, April 27th. The oil and gas company reported ($0.13) earnings per share for the quarter, topping analysts’ consensus estimates of ($0.21) by $0.08. Patterson-UTI Energy had a negative net margin of 35.49% and a negative return on equity of 17.74%. The company had revenue of $509.80 million during the quarter, compared to analyst estimates of $512.08 million. During the same period in the prior year, the business posted ($0.57) EPS. The business’s revenue for the quarter was up 111.5% compared to the same quarter last year. On average, equities analysts expect that Patterson-UTI Energy, Inc. will post 0.08 EPS for the current year. 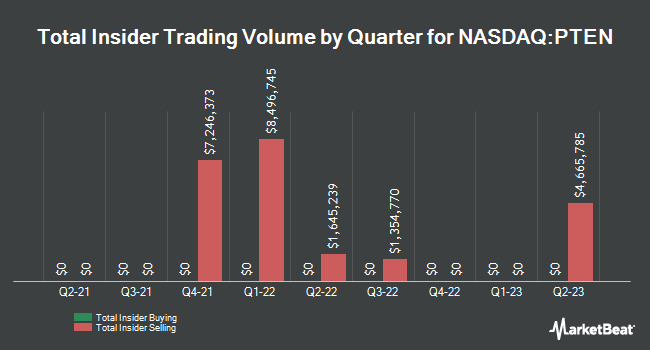 Insmed Incorporated Given Consensus Recommendation of “Moderate Buy” by Analysts