Shares of Palantir Technologies Inc. (NYSE:PLTR – Get Rating) have earned an average rating of “Hold” from the nine analysts that are covering the firm, MarketBeat reports. One investment analyst has rated the stock with a sell rating, three have issued a hold rating and three have assigned a buy rating to the company. The average 12-month price objective among analysts that have issued a report on the stock in the last year is $14.89.

About Palantir Technologies (Get Rating)

Palantir Technologies Inc builds and deploys software platforms for the intelligence community in the United States to assist in counterterrorism investigations and operations. The company provides palantir gotham, a software platform which enables users to identify patterns hidden deep within datasets, ranging from signals intelligence sources to reports from confidential informants, as well as facilitates the handoff between analysts and operational users, helping operators plan and execute real-world responses to threats that have been identified within the platform. 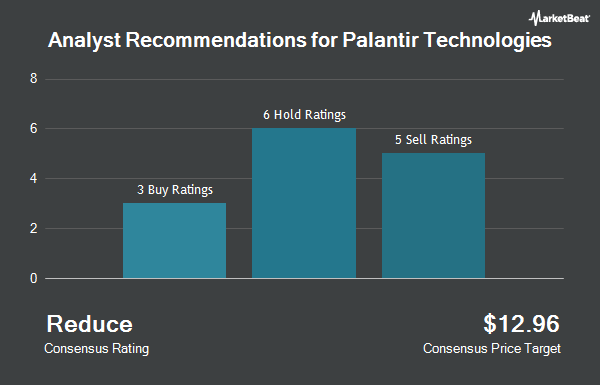 Complete the form below to receive the latest headlines and analysts' recommendations for Palantir Technologies with our free daily email newsletter: