RedHill Biopharma (NASDAQ:RDHL – Get Rating) will be issuing its quarterly earnings data before the market opens on Thursday, June 23rd. Analysts expect the company to announce earnings of ($0.40) per share for the quarter.

RedHill Biopharma (NASDAQ:RDHL – Get Rating) last posted its earnings results on Thursday, March 17th. The biotechnology company reported ($0.50) earnings per share (EPS) for the quarter, missing analysts’ consensus estimates of ($0.40) by ($0.10). RedHill Biopharma had a negative net margin of 113.98% and a negative return on equity of 379.42%. The business had revenue of $22.07 million during the quarter, compared to analyst estimates of $22.99 million. During the same period in the previous year, the firm posted ($0.70) earnings per share. On average, analysts expect RedHill Biopharma to post $-1 EPS for the current fiscal year and $0 EPS for the next fiscal year.

Separately, StockNews.com assumed coverage on RedHill Biopharma in a research report on Thursday, March 31st. They set a “hold” rating for the company.

About RedHill Biopharma (Get Rating)

RedHill Biopharma Ltd., a specialty biopharmaceutical company, primarily focuses on gastrointestinal and infectious diseases. The company promotes gastrointestinal drugs, including Movantik for opioid-induced constipation in adults with chronic non-cancer pain; Talicia for the treatment of Helicobacter pylori infection in adults; and Aemcolo for the treatment of travelers' diarrhea in adults. 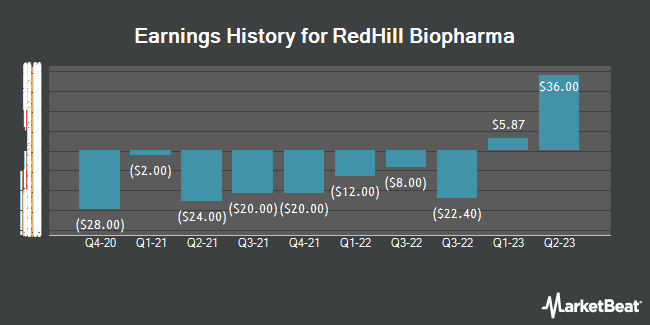 Complete the form below to receive the latest headlines and analysts' recommendations for RedHill Biopharma with our free daily email newsletter: